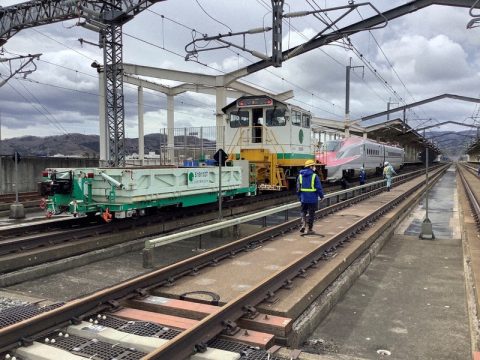 East Japan Railway (JR East) has begun towing away the Shinkansen train cars that derailed earlier this month following a powerful earthquake. The first four cars were removed on Sunday.

Over the past week, the derailed train cars – 16 out of a total of 17 – were jacked up and put back on the rails ahead of removal. Twelve cars were ready to be towed on Sunday, with the first four now at the nearby Shiroishizao Station. JR East aims to have all train cars removed by the end of this week, Japanese media reported. The units will then be transported to a maintenance centre.

The March 16 derailment involved the so-called Tohoku Sinkansen which connects the Japanese region of the same name to Tokyo. As a result, the service between Koriyama Station in Fukushima Prefecture and Ichinoseki Station in Iwate Prefecture had to be suspended. Train services will gradually be resumed from April 2 onwards. JR East hopes to have the Tohoku Sinkansen service back to normal on April 20.