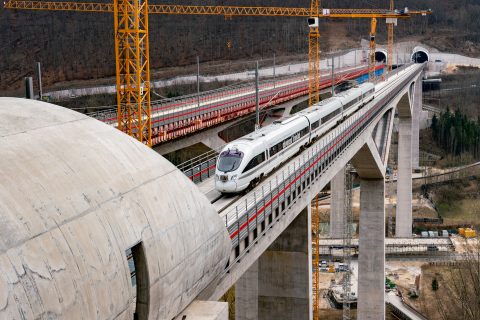 A German ICE test train hit 250 kilometres per hour on Monday on the Wendlingen-Ulm section of the new ICE-line to Stuttgart. The first part of the route is scheduled for commissioning in December.

On board for the occasion of the first high-speed journey on Monday were DB Infrastructure Board Member Ronald Pofalla and Baden-Württemberg’s transport minister Winfried Hermann. The ICE S test train traversed the 85-metre high Filstal Bridge and several tunnels at high speed for the first time after regular runs were conducted earlier this month.

Monday’s trial run marks the start of several planned high-speed runs on the 60-kilometre Wendlingen-Ulm section, where drivers will hit speeds of 275 kilometres per hour. Once the line is entered into service, the maximum speed will be 250 kilometres per hour.

A special ICE S test train will be used for the high-speed runs, comprising two power cars and two regular cars to house testing equipment. The test team will be focussing their attention on the interaction between the train, the track and the overhead lines.