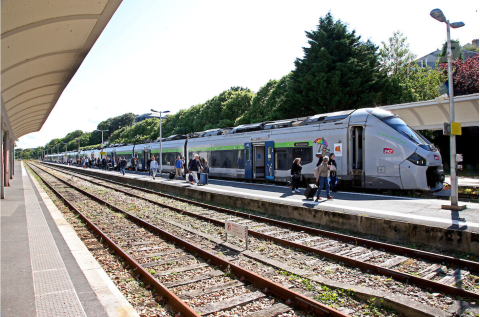 A new agreement for the operation of French TET Intercity trains has been signed by SNCF Voyageurs and the French Transport Ministry. The gradual opening up of the TET lines to competition is also set out, as well as the goal of a 20 percent growth in passengers within the next ten years.

“More trains: that is our ambition”, said Jean-Baptiste Djebbari, French Minister Delegate for Transport, who signed the new agreement with SNCF Voyageurs on 17 March. It defines the operating and financing terms of the Trains d’Équilibre du Territoire (TET) public service, entrusted by the State to SNCF Voyageurs through its Intercity’s offer for the period 2022-2031.

The TET intercity trains provide a fast main line service between the main French cities that are not connected by high-speed rail. As of January 2022, the French State is the organising authority for 12 TET lines. Since 2017, six French regions have overtaken the organisation of the TET lines.

The agreement with SNCF aims to increase the number of passengers carried by TETs by about 20 per cent over the next ten years. This growth dynamic is linked to the development of services already planned on the existing lines, including the creation of a fourth daily Nantes-Bordeaux return trip from the beginning of 2022 and a third daily Nantes-Lyon return trip in 2023. as well as the implementation of additional return trips on the Paris-Orléans-Limoges-Toulouse and Paris-Clermont-Ferrand lines from 2026.

It is not the first time that this line was set out to open to competition. At the beginning of 2020, the French State launched a procedure to open up to competition the first two TET lines: Nantes-Bordeaux and Nantes-Lyon. However, the call for tenders was declared to be without effect in December 2020 in view of the economic difficulties for railway players due to the corona crisis and the absence of a reliable prospect of a resumption of traffic.

The indicative dates for the start of operation by the railway operator that wins the call for tenders that will be published are as followed:

On the prospect of competition of TET lines, Christophe Fanichet, Chairman and CEO of SNCF Voyageurs, said: “SNCF Voyageurs will put all its energy into demonstrating its know-how and its ability to reinvent itself in order to gain the State’s trust.”

In addition to the usual performance indicators relating to service quality, regularity and the passenger satisfaction on board trains, the new agreement also includes an improvement incentive system directly indexed to passenger satisfaction and the measurement of service quality. This includes new indicators linked to passengers’ priority expectations, such as punctuality at departure, responsiveness and reliability of passenger information, particularly in disrupted situations. This shared demand for quality of service should help to sustain a positive dynamic after a period strongly impacted by the corona pandemic.

It was already planned that by 2025, all rolling stock on daytime lines, except for the Bordeaux-Marseille line, should be renewed with new trains, which will continue in the following years.