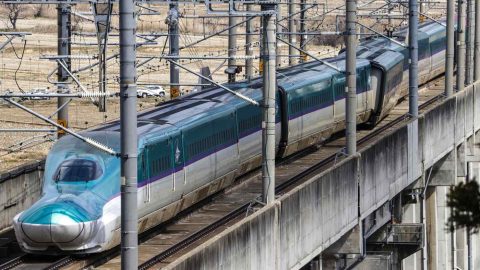 Powerful earthquake knocks Japanese bullet train out of its tracks

A Japanese bullet train derailed following a powerful earthquake with a magnitude of 7,4 late on Wednesday evening. While several train cars derailed, no injuries were reported.

The incident involved the so-called Tohoku Sinkansen, operated by East Japan Railway (JR East) and travelling to Tokyo. At the time of the derailment, which happened on a viaduct some 2 kilometres outside Shiraishi Zao Station, 78 people were on board. In all of its 58 years of service, the Japanse bullet trains remain without a single fatal incident.

It may take “a considerable amount of time” to restart operations, a JR East spokesperson was quoted as saying by Japanse media. Images by Japanse daily Mainichi revealed damage to overhead lines as well. With the bullet train service temporarily suspended, Japan Airlines will provide additional flights between the Tohoku region and Tokyo.

The earthquake’s epicentre was off the coast of Fukushima, where in 2011 the fourth most powerful earthquake ever recorded triggered the Fukushima nuclear disaster. Wednesday night’s tremor mainly affected the Miyagi and Fukushima. The Japanse government on Thursday reported four fatalities and 107 injuries.