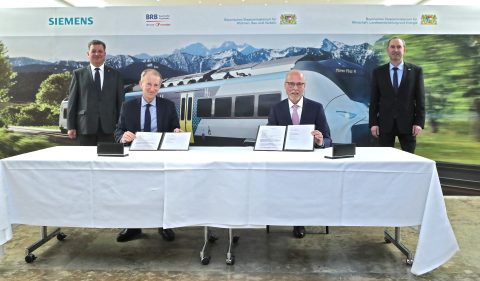 Published on 16-03-2022 at 10:23
First hydrogen-powered train for Bavaria. The first hydrogen-powered train for Bavaria is taking form. On March 15, representatives of Siemens Mobility and Bayerische Regiobahn (BRB) signed a leasing contract for the innovative prototype in the presence of Bavaria’s Economic Affairs Minister Hubert Aiwanger and Bavaria’s Transport Minister Christian Bernreiter. The contract is a follow-up to the letter of intent signed by all the participants in July 2021. fltr: Christian Bernreiter (Transport Minister Bavaria), Albrecht Neumann (CEO Rolling Stock, Siemens Mobility), Arnulf Schuchmann (Managing Director, Bayer

Representatives of Siemens Mobility and Bayerische Regiobahn signed the leasing contract for the hydrogen trains in the presence of Bavaria’s Economic Affairs Minister Hubert Aiwanger and Bavaria’s Transport Minister Christian Bernreiter. The contract sets the collaboration in stone following a letter of intent signed in July 2021.

Siemens’ two-car hydrogen train will be tested on the Augsburg-Füssen route, among others, beginning in mid-2023. Pilot operations on the rail network of Bayerische Regiobahn are initially planned for 30 months. Following the trials, the train is expected to officially enter passenger service as of January 2024.

In Bavaria, hydrogen is set to become what Bavaria’s Economic Affairs Minister Hubert Aiwanger calls a ‘key pillar’ for  climate protection in the areas of transportation, industry and energy. “This train is an important part of this strategy towards a ‘transport turnaround’ with hydrogen, which is why we are promoting this project.” Bavaria is supporting the project with several million euros. The goal is to achieve climate-neutral passenger rail transport in the state by 2040.

The hydrogen-powered train is being developed on the basis of the Mireo Plus platform from Siemens Mobility, which is currently available as a battery-powered version as well as with a conventional electric drive powered by overhead lines. The main component of the hydrogen traction drive are fuel cells mounted on the roof. The system includes the latest generation of underfloor batteries supplied by the battery specialist Saft. The same train will also do trial operations in other state Baden-Württemberg with Deutsche Bahn in 2024 as part of the H2goesRail project.