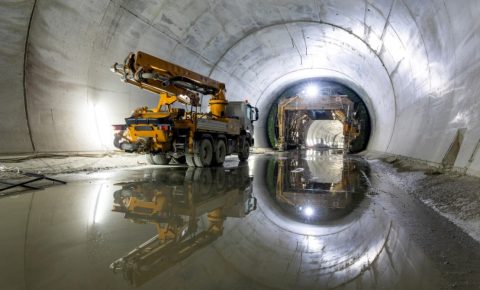 Brenner Base Tunnel underground junction not compliant with regulations

A new report concludes that an underground connection to the Brenner Base Tunnel in Germany would not be fully compliant with the current regulations. A connection point underground, instead of the normal above-ground, is preferred by local groups. It would not be impossible, finds the German Center for Rail Transport Research (DZSF), however the question is whether the effort and cost of further research is worth to be invested.

The Brenner Base Tunnel is a railway tunnel currently under construction, running for 55 kilometres between Innsbruck (Austria) and Franzensfeste (Italy). It will be part of a major international railway corridor, which connects Germany with the Mediterranean and Scandinavia.

The German Center for Rail Transport Research (DZSF) examined the technical feasibility and eligibility for approval of underground connection points. The test goes back to an idea of ​​the “interest group Inntal 2040” to move a connection point in the mountain flank of the Wildbarren. An earlier investigation by the DB Netz project team also revealed that not all safety-related specifications could be complied with.

The planned interchange at Niederaudorf as an above-ground transport facility would have a variety of adverse effects on local residents and the environment. In order to counteract this, a local interest group has suggested that the junction be built underground. It is proposed that the link would constructed in a tunnel in the mountain and lead northwards into the original planning.

The DZSF looked at many railway tunnels, but did not identify a tunnel structure that is comparable to the underground interconnection point either in Germany or in the area studied (EU and Switzerland). The concept of an underground junction is not explicitly provided for in the European and German regulations (SRT TSI and EBA Tunnel Guideline).

In particular, the smoke in neighbouring tunnel tubes via the connecting tubes of the junction is considered problematic in case of fire. Smoke could then spread from one tunnel tube to a connecting one. A measure to prevent this could be the installation of gates which can be closed, but that is deemed as not suitable for regular operation for operational and technical reasons, finds the DZSF.

However, the statement of Deutsche Bahn that gates are the only possibility to compensate for an incomplete structural separation of two tunnel tubes cannot be unreservedly agreed with, says the DZSF. This in view of the solutions found in other European countries for selective ventilation at branch points in tunnels. The installation of branch points in tunnels is being implemented in some tunnels currently planned or under construction in the EU (outside Germany) and Switzerland. The risk of smoke in connected tunnel tubes in case of fire is then prevented by installing efficient ventilation systems. This option would have to be extensively studied in the context of the Brenner Base Tunnel connection points, however.

The researchers also note that substitute measures to ensure additional tunnel safety in the case of an underground connection point would still have consequences on the surface: Smoke outlets, gallery exits, rescue areas, their access roads and technical equipment could “easily exceed the total environmental consumption of an above-ground junction”.

Following the study, the German Federal Ministry of Transport recommends refraining from possible exemptions to the original plans from the point of view of economic efficiency. They said that in the ongoing preliminary planning, DB will examine the possibilities of optimising the location of above-ground connection points.

Transport Minister Kerstin Schreyer of the state Bavaria, where the tunnel connection is located, says the ball is now in the hands of the federal government. However, she expects that the underground option is also further investigated. “Since this variant is not ruled out per se, I expect the federal government to deal with it more intensively and have it specifically examined by DB Netz.”

She emphasises that although it is a project with great international relevance, the Ministry must not be deterred by the argument of large effort in order to be able to involve the region in the measure. Also, the more concrete plans can also be a blueprint for other future rail projects in Germany and abroad.

Maybe take a look at the Delft tunnel in the Netherlands which has an underground train station with 4 connecting tunnels at both sides.

Or take a look at the Sophia tunnel, part of the Betuweroute freight line between the Port of Rotterdam and Germany. To protect the land on both sides of the tunnel from flooding in case of a dike or tunnel breach, both tunnel ends contain massive steel doors that will be lowered automatically in case of flooding of the tunnel.

There are already too many tunnel sections planned on the German side of the Brenner link. These make train travel inconvenient, more expensive and consume additional energy.
Rail should be build overground as a rule, and it is cheaper to buy existing buildungs for 100 million Euro, even at twice their value from homeowners to demolish and replace themm than drill tunnels for 1 billion Euro.