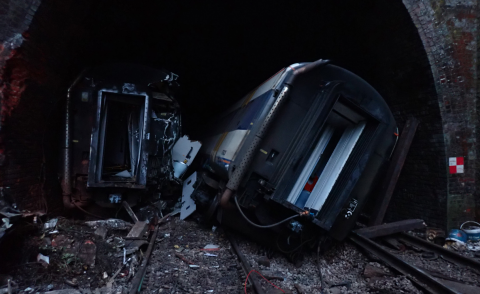 The passenger train that collided with another passenger train at the Salisbury tunnel junction last year began to slide almost immediately after applying the brakes, possibly due to railhead contamination, an interim report on the ongoing investigation by the Rail Accident Investigation Branch (RAIB) has revealed.

During the investigation into the October 2021 collision, which left 13 people injured and caused significant damage to the train sets and railway infrastructure, investigators found evidence of medium and heavy railhead contamination. The RAIB also writes that the tracks were likely wet at the of the collision. This, the report published on Monday states, suggests “that there was low friction between the wheels and the railhead.”

In reconstructing the timeline of the incident, the RAIB found that the train’s wheels “began to slide almost immediately after this brake application was made”. Seconds earlier, the driver had received an Automatic Warning System (AWS) notification, upon which he applied the brakes. “This was in accordance with his usual practice and was done with the intention of being able to stop the train at signal SY31, which was at this point around 1,500 metres away”.

When the wheels began to slide, the driver made a full-service brake application, but to no avail. For this reason, Train Protection and Warning System (TPWS) kicked-in, as the train was travelling faster than the set speed of the overspeed sensor (OSS) system. As the driver had already applied the maximum available braking, the TPWS emergency brake demand had no effect on the degree of braking, the report states.

Railhead contamination known to have caused incidents in the past

The RAIB also found that while railhead treatment trains (RHTT) were in use, the last unit to pass over the junction did so 32 hours before the collision. It used high-pressure water jetting. Applying a so-called adhesion modifier gel could have been possible, were it not for the fact that “it was not required to do so on this section of track”.

Railhead contamination was not mentioned as the direct cause of the collision, although it is known to have caused incidents in the past. A near-collision in 2019 between a train and a vehicle at a crossing on the Norwich to Sheringham line was due to railhead contamination and vulnerable wheel-rail interface, the RAIB found last month.