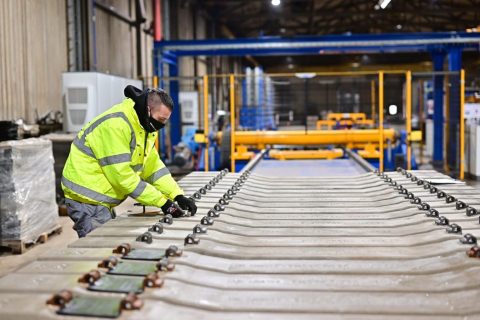 Infrabel ordered 200,000 units and claims to be the first European railway manager to make its sleepers more ecological on this scale.

The sleepers are produced in cooperation with De Bonte’s Research and Development Centre in Laakdal (Antwerp).

Waste from the oil industry

The production of sulfur concrete sleepers means 40 per cent less CO2 emissions than concrete sleepers. Sulfur replaces cement and water as binding agents and is mixed directly with the granulates. This avoids the energy-intensive process of converting limestone into cement, which releases large amounts of CO2. Furthermore, sulfur concrete only needs to be heated to 140°C for casting, whereas cement production requires a temperature of 1400°C.

In addition, the material is fully recyclable. The material can be melted and hardened again and again. Waste, too, is reused. These sleepers give another use for sulfur, a waste product from the oil industry.

The plant for the production of green sleepers is located on the site of the former BCMA concrete factory in Baudour in the a province Hainaut in Wallonia in the south of Belgium. Family-owned De Bonte, one of Infrabel’s sleepers suppliers, bought the 100,000 m2 site in 2017. An investment of 14 million for the refurbishment of the buildings and the installation of two production lines for sulfur concrete products: sleepers and sewer pipes. In addition, there is also a production line specifically for sleepers used in switches.

The green sleepers are produced on an industrial scale in Baudour, near Saint-Ghislain, but they were fully developed in Kempen, in the province of Antwerp. The entire production line was also designed there. Currently, 15 people work at the Baudour site. In the coming months, the number of employees is to be increased to 45.

The company’s ambition is to market sulfur concrete and its applications throughout the world. The expansion of production capacity should enable De Bonte to employ more than 100 people at its site in Hainaut over the next few years.

Talks with the Netherlands and France

De Bonte is also said to be in talks with the Netherlands and France about placing initial orders for green sleepers. In the future, other sulfur concrete products could also be developed for the railway sector, such as platform edges.

This article first appeared on our Dutch sister publication SpoorPro.nl