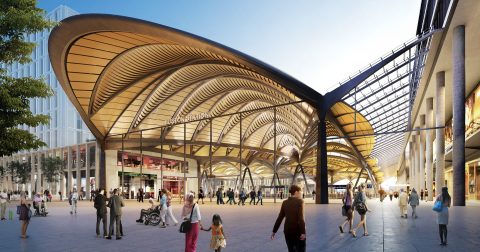 Major HS2 construction packages up for grabs this month

The joint venture between construction firms Mace and Dragados, HS2’s construction partner for London’s Euston station, will be inviting bids on construction packages with a combined value of more than 500 million pounds (598 million euros) this month. It will be a multi-year procurement programme that will support an estimated 3.000 jobs on-site.

The first-year offerings comprise the piling, earthworks and reinforced concrete packages for the station’s main substructure. Other packages include tunnelling related to the connections with the London Underground and Euston station’s superstructure. Under the current time frame, 2025 will see the procurement of the final packages. Mace Dragados will be making the opportunities available on a dedicated website.

“Our work to deliver HS2’s London terminus station at Euston will really ramp up over the next few years. We have been preparing the area for the construction of the new station, which will transform the Euston area, including delivering improved connections with the London Underground”, HS2 project client for Euston Andy Swift was quoted as saying by various media.

“We’re looking for our suppliers to not only provide us with skilled team members that will help us grow in size and capability, but to bring ideas and innovations that will help us set standards in the industry”, Mace Dragados deputy delivery director Paul Leighton added.