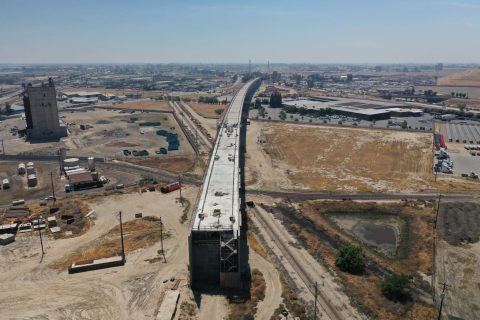 A new draft project blueprint for the California bullet train, set to connect Los Angeles and San Fransisco, has revealed yet another cost increase on Tuesday. Officials now forecast the project will cost at least 105 billion dollars, 5 billion more than the previous estimate.

The main reason behind the cost increase is the California High Speed Rail Authority abandoning the single-track option for the 171-mile starter section between Bakersfield and Merced in central California (275 kilometres). Officials have now decided on a two-track system instead. Of the starter section, a 119 mile-section is currently under construction.

Another bone of contention is the location of the Merced bullet train station, with state officials demanding it be incorporated in the existing rail hub so as to allow passengers from the conventional lines to transfer to the bullet train. The California High Speed Rail Authority is now working on developing a single station.

The additional billions represent the latest cost increase for the troubled project, which has seen its price tag more than triple over the past few years. The authority’s first projections back in 2008 put project costs at 33 billion dollars. Further costs increases are likely, as different sections of the high-speel line remain in various stages of development and planning. First operations are expected to commence in 2031.

This reporting is incredibly frustrating. First, the 2022 Business Plan is no longer a draft as it has been adopted. Second, the Business plan was released in early February of 2022, so this is hardly “news” at this point. Third, and most importantly, the $105 billion is among the highest estimates for the cost of Phase 1 of the system. It could be as low as $72 billion. It is disingenuous to infer that the $105 billion is the final cost without providing context.

It is my opinion that this news is not disingenuous at all once the reader realizes that this project was never meant to be finished. It was formulated to gift the Unions with cash, and rewards paid to Jerry Brown and others in Sacramento. Millions have been spent and there is not a single train track to show for it. Maybe eventually a track will be placed merely for the show of it politically, but it will never be completed. It is more profitable for this project to remain in limbo forever.