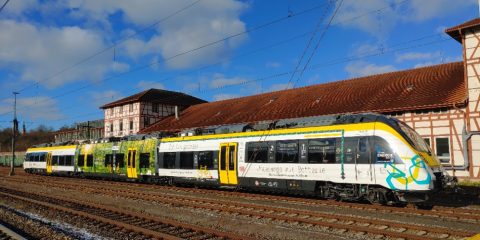 Alstom and Deutsche Bahn (DB) are set to enter into service Alstom’s Battery Electric Multiple Unit (BEMU) for trial runs. The test operations commenced on January 24 in the state of Baden-Württemberg, followed by passenger services in neighbouring Bavaria from February 5th onwards. The tests will conclude in May 2022.

“With this test, DB Regio wants to gain practical experience in order to master these future technologies in operation and maintenance”, DB regional manager Jörg Sandvoss said. Battery electric train sets are the likely successor to the existing diesel-powered units that still run on 450 lines across Germany.

In Baden-Württemberg, the BEMU will run between Stuttgart and Horb, while on weekends it will be in service on the Bavarian Pleinfeld-Gunzenhausen line. As such, the local transportation companies NVBW and BEG are involved as partners.

By testing the BEMU across two federal states, different battery charging scenarios can be tested. As the line in Baden-Württemberg is electrified, charging can take place while running. By contrast, charging in Bavaria is only possible at the departure and destination stations.

“I hope to gain important insights from this project, because the Bavarian railway network is naturally suited for the use of such battery trains”, Bavaria’s transport minister Kerstin Schreyer commented.

“On routes where the construction of an overhead line is difficult and therefore too expensive or can only be realized in the future, battery or hydrogen trains will gradually be used and replace the previous diesel operation”, her counterpart in Baden-Württemberg, Winfried Hermann, added.