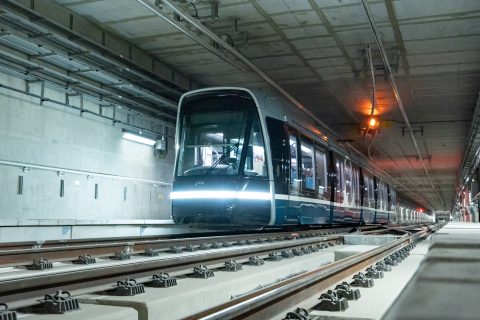 Earlier this month, Qatar Rail entered into preview service the first line of the new tram network in the planned city of Lusail, which will play host to the 2022 FIFA World Cup later this year. The so-called Orange line calls at six stations for the time being.

Qatar Rail uses Alstom’s Citadis X05 trams. Each unit seats 64 passengers for a total of 209 travellers. The cars are fitted with USB sockets and screens for travel information. Travellers can use the Doha Metro Travel Cards on the Lusail tram network. Passengers have to check in and check out again, in similar fashion to the system that is in place in the Netherlands.

Qatar Rail stresses that the Lusail Tram is still in its testing phase. When fully operational, the line will run across a length of 28 kilometers, 7 kilometres of which are underground, and feature 25 stations. Two of those are interchange stations, with connections to the metro line. A total of 28 trams have been ordered with Alstom.

Lusail is located some 20 kilometres to the north of Doha, the capital city of Qatar. It is one of the five city’s that play host to the 2022 FIFA World Cup. Eventually, the tram network will be expanded with a Turquoise Line and a Pink Line.