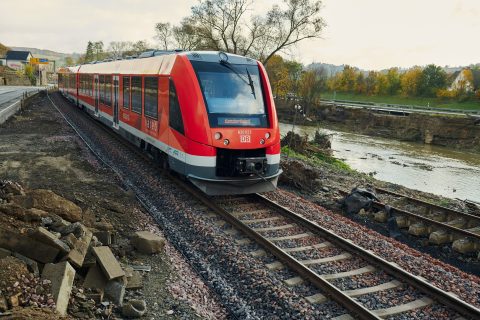 The damaging floods that took place last summer in northern Europe still strongly affect railway networks. In Germany, for instance, parts of the damaged network will become functional again during 2022 or even later.

The floods of July hit the German North-Rhine Westphalia and Rhineland-Palatinate regions mostly. So far, 80 per cent of the railway network in these regions has been reconstructed, and trains are running. However, in areas like the Ahr Valley and Eifel, this is not possible yet since impairments are difficult to overcome.

A spokeswoman from Deutsche Bahn explained how the situation is. Specifically, in the Ahr Valley railway, reconstruction works include the replacement of eight bridges and almost all supporting structures, while new tracks have to be laid between Walporzheim and Ahrbrück. “At the same time, the first plans for the all-around renovation of the railway infrastructure and electrification are in progress”. However, “concrete prognoses for recommissioning are not yet possible”, underlines DB.

Moreover, works along the Eifel route from Hürth-Kalscheuren to Euskirchen are also in full steam. DB plans to start rail traffic between Euskirchen and Mechernich by next spring. The section to Kall can be used in summer 2022, while the same applies to the section between Rheinbach and Euskirchen. DB will renew the route between Kall and Nettersheim by the end of 2023. To do this, the specialists tackle twelve kilometres of tracks, eight culverts and several bridges.”

Despite substantial parts of the German railway network still facing problems, freight transport does not seem to suffer from them. “On the routes that have not yet been restored, there are only minor impairments for freight traffic”, said a spokeswoman from DB. “Only a few services for the transport of wood products were taking place there; thus, there is not a big impact”, she concluded.

Climate change adaptation is one of the topics of the conference RailTech Europe 2022. The second day, on June 22, is about the topic Resilient Rail and Sustainability. For more information and speakers, visit the website.