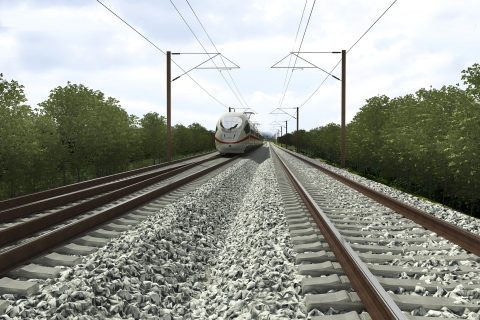 Another section equipped with ETCS on Danish Ringsted – Fehmarn line

Banedanmark has completed the installation of European signalling system ETCS on the sixth section of the line from Ringsted to coast, where the Fehmarnbelt tunnel is scheduled to open in 2029.

The Danish infrastructure manager is in the process of installing ETCS Level 2 on the around 120 kilometre long stretch between Ringsted and Rødby. This will be an important corridor between Denmark and Europe when the tunnel to Germany will open. The digital signalling system is now ready for operation between Mogenstrup on southern Zealand and Nykøbing Falster.

“Instead of old, analogue signals from the 1950s and early 1960s, trains will run on 21st century digital technology”, says Thilde Restofte Pedersen, director of the Signal Programme. “This means that the trains will have the opportunity to run both faster and more frequently. It is an important step on the road to preparing the next corridor for Europe for the train traffic of the future. That is why we are happy that we can now put an end to another stretch of the long-distance line.”

“With the new signalling system, both traffic planning and execution will be more automated, and then a new, digital system with fewer components in the track will mean fewer signal errors”, says Janus Steen Møller, director of Signal Systems at Banedanmark.

“At the same time, the new signaling system is a prerequisite for electrifying the railway. That is why it is also an important part of preparing the railway for new, climate-friendly electric trains”, he says. Part of the electrification is already finished, such as between Ringsted and Næstved, where the ETCS installation was finished before.

In the first period, while everyone is getting used to using the new signalling system on the line, Banedanmark has extra eyes on the operation. However, there may be ‘growing pains’ that interfere with train operations in the beginning, according to the railway manager.

With the latest milestone, the new signaling system is put into use on several long-distance lines during 2021. In Jutland it applies between Langå, Struer and Holstebro, and in Zealand between Køge and Næstved.

“In the past year, we have shown in the Signal Program that we have full speed ahead in the roll-out of the new signaling system on the long-distance line. Therefore, it is incredibly satisfying that we can now end 2021 by putting the new system into operation on the first stage of the historically large project in the form of the Ringsted-Fehmarn line”, says signalling director Thilde Restofte Pedersen.

In 2022, the new signaling system will be installed on three more lines on the long-distance line. In Zealand between Vigerslev and Ringsted, and in Jutland between resp. Vejle and Holstebro and between Herning and Skanderborg.