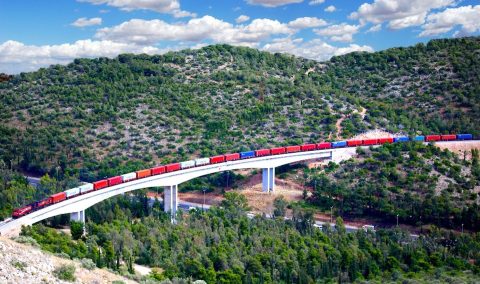 The allegedly biggest infrastructure project that Greece has ever seen was announced by the Greek ministry of infrastructure and transportation. A plan worth 4 billion euros foresees the start of six projects, including the application of ETCS, the electrification of existing tracks and the construction of new ones.

“For the first time in Greek history, railways get what they deserve since the country needs them. We are setting in motion the largest railway project ever, which upon completion will change the transport map and boost Greece’s international position”, said Kostas Karamanlis, Greek minister of infrastructure and transportation.

On his behalf, deputy minister George Karagiannis mentioned that the new railway project serves a strategic purpose for Greece “to become the transport crossroad of south-eastern Europe in the coming years”. The six upcoming projects will be constructed together with their subprojects to be fully functional when complete. Who will undertake the project construction will be decided via public tenders.

The connectivity of small but also major ports via railways will be among Greece’s infrastructure upgrade priorities. Specifically, two small regional ports, these of Lavrio and Rafina, which are pretty close to Athens, will acquire railway lines to enhance their inland connectivity.

On top of that, the 6th and largest dock of the Port of Thessaloniki will also acquire railway lines to connect with the main railway network. For Greece’s second-largest port, the fact that the port of Thessaloniki did not have a railway connection to its largest dock indicates what is going on in Greece. The country’s railway network lags and needs further upgrade, and it’s positive that the current government focuses on hub connectivity.

After all, the port of Thessaloniki is set to play a central role in connecting sea lines with the Balkans and central Europe via rail freight. New rail freight services will be launched in the coming months, in which the port will be the main component. Hopefully, the governmental upgrade will advance developments in the northern Greek port, which could generate a new rail freight gateway in southeastern Europe, combined with investments from other companies.

ETCS and connection with northern borders

In general, the rest of the projects focus mainly on improving rail links in northern Greece and the borders with Bulgaria. For instance, one project concerns the construction of a new railway line between Thessaloniki and Toxotes, enhancing connectivity between Greece’s second-largest city and north-west Greece in the direction of Turkey and Bulgaria.

Moreover, the existing line between the port of Alexandroupolis and the Ormenio border-crossing between Greece and Bulgaria will see significant upgrades that will include the use of ETCS and full electrification of the line. This is essential for companies that transit between the two countries since it was a prerequisite for flawless traffic and the launching of more rail freight services.