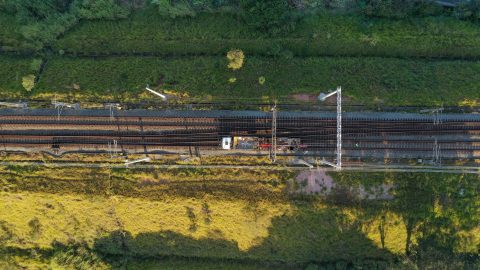 More money invested in roads than rail, where is the shift?

Railways are constantly hailed as the future for sustainable mobility, and leaders stumble over each other to say that we need a shift to rail. But when looking at the investments that were made in rail in the past years, it is clear that rail has not been a priority, shows research by Investigate Europe.

Independent platform Investigate Europe analysed data of the amount of money invested in transport infrastructure across Europe, so railways can be compared to road and air transport. 843 billion euros was invested in railway networks from 2000 to 2019, according to OECD data (the Organisation for Economic Co-operation and Development). In the same period, investment in road infrastructure totalled 1,341 billion.

RailTech earlier reported that there is indeed no sign of a modal shift to rail, following a market report from the European Commission. The market share of rail compared to other land-based passenger transport in the EU has been stuck at around 7.8 percent between 2015 and 2018. The share of rail in land freight transport has mainly decreased, and was 18.7 percent in 2018.

Next to countries allocating budget to infrastructure, the EU also has several funds. There are three main sources for financing rail projects at EU level: the Cohesion fund, European Regional Development Fund (ERDF) and the Connecting Europe Facility (CEF). Investigate Europe analysed all of them for the two funding periods of which usable data was available, namely 2007-2013 and 2014-2020.

Analysis of data shows that in total, at least 62 billion euros were provided for the development of rail networks across the European Union between 2007 and 2020, of which 48.6 billion for the TEN-T network. These Trans-European Transport Network corridors are prioritised by the EU, as they are important sections for international connectivity. However, 82.5 billion went to roads and motorways in the same period, of which around 43 billion to TEN-T.

The European innovation initiative Shift2Rail, which aims to develop rail through collaborative research and innovation projects, started its journey back in 2009. The need for a shift was already seen back then, but was not reflected in the allocation of European investments to transport.

More than 16.5 billion euros from the CEF fund went to rail projects in 2014-2020, while 2.1 billion went to road and 1.5 billion to airports. The CEF programme contributes to the implementation of the Trans-European Transport Network (TEN-T) by financing key projects to upgrade infrastructure and remove existing bottlenecks whilst also promoting sustainable and innovative mobility solutions

Of the CEF fund, the highest amount of money went to the construction of the Brenner Base Tunnel and the new Lyon-Turin Rail Link Mont Cenis Base Tunnel, with respectively almost 880 million from CEF being allocated to Austria and Italy for the first and 814 million euros for Italy and France for the second tunnel.

Of the new round of CEF funding, for 2021-2027, which was adopted this year, 25.81 billion euros goes to transport in the EU. In any case, an amount of 1.56 billion euros is reserved for rail projects between cohesion countries in Europe, of which Rail Baltica is the main beneficiary, receiving 1.4 billion euros. In 2021, there is 7 billion for transport available. Next to railways, this can also go to roads or waterways, for which projects can be submitted until 19 January 2022. It thus remains to be seen how much of the CEF and other European funds will go to rail, and if roads will still be prioritised in the coming years.

1 comment op “More money invested in roads than rail, where is the shift?”

You’re doing better than in the US; at least you have tons of well utilized networks already in place. Our new infrastructure bill, though the most funding ever for rail that we can remember, will cover basic state of good repair and a couple of projects in the northeast. Please see http://www.climaterailalliance.org for more info. We look to Europe’s excellence in service for what we ought to be doing.