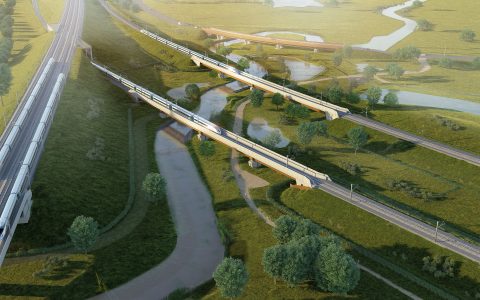 North of England the big loser in cancellation of HS2 plans

The worst kept secret in Britain is finally out. The high speed rail network, planned for the north east of England is officially scrapped. The transport secretary Grant Shapps made the announcement to the House of Commons this morning. The eastern leg, connecting Nottingham, Sheffield and Leeds, and on to the East Coast Main Line, will not be built. HS2, as the project is commonly known, will run from London to Birmingham, with extensions to Manchester and a connection to the West Coast Main Line at Crewe or Wigan.

There has been a predictable storm of protest at the news, within today’s publication of the UK government’s Integrated Rail Plan. The headlines have been stolen from that document by the news that the plug has been pulled on the high speed connections to the East Midlands and Yorkshire. Critics say this will put back the cause of rail development by more than a decade. Critics of the scheme though have hailed the news as a huge victory.

Fury has been the overwhelming emotion from civic leaders in the north of England. Concurrent with the cancellation of the broadly north-south leg of the HS2 network, plans for a dedicated high speed line running east-west, connecting the cities of Leeds, Manchester and Liverpool, have also been dumped. The change of plans do not affect the building of the line between London and Birmingham, currently Europe’s biggest single civil engineering project, and under the management of HS2 Limited, the company specifically set up to deliver the project.

Railway engineer and writer Gareth Dennis, speaking to BBC radio, said this represented a gross lack of ambition on the part of the UK government.

He slammed the piecemeal upgrades put in place instead – something he has called “rail betrayal”. “What the government are proposing is the opposite of ambitious, it is taking us back ten or fifteen years”, he said. Making expensive, partial upgrades to existing lines, he argued, will not improve overall capacity, and will in fact make it more difficult to improve local passenger services, and leave freight at the back of the queue.

The Integrated Rail Plan, a hoped-for generational change in the attitude to rail development, was to be the culmination of the findings of the 2020 Oakervee Review into strategic transport policy. However, the document has been criticised already as less of a distillation and more of a watered-down unambitious compromise that will leave the UK even further shunted off into the economic slow lines.

However, some north of England members of parliament, who stood for election pledging to resist HS2, have been jubilant at the news. Alexander Stafford, the member of Parliament for Rother Valley, has spoken out frequently in defiance of his own ruling Conservative party “This is great news today. At last we are seeing the cancelling of the ‘2b’ arm. This is something I’ve campaigned for since being elected”, he said. “We don’t want the expensive line that will benefit only a few people in Leeds city centre. Instead we will see the improvements to local transport that we so desperately need.”

With the lines in the north of England, already many of which are congested, forced to absorb more mixed traffic, Gareth Dennis agues that the cancellation of HS2 in the north – the so-called HS2b Eastern Leg – and the variously called Northern Powerhouse Rail – will mean a worse service overall. By imposing fast trains on existing lines, he says, local services will have no room and paths for freight will be at even more of a premium.

On Tuesday, regional news papers across the north of England, published an unprecedented joint front page – with a mock up of the five ministers most responsible – including prime minister Boris Johnson and transport secretary Grant Shapps portrayed as charters from the cult movie “Trainspotting”. The government figures were posted as the hopeless drug addicted social misfits of the film, with the famous catchphrase amended to “Choose life – choose the North”.

Liverpool – Leeds through Manchester links three large cities of Northern England, just 73 miles (117 km) apart by road, with only hourly train services that take 1:45 hours, for an average speed of only 41 mph (66 km/h) with diesel power, even with relatively few (five) stops for this speed. To achieve twice that speed should not be too ambitious.

For comparison, Birmingham-Leeds (114 miles, hourly in 2:19, 49 mph) is a little faster now and the cancelled connection here seems less important.