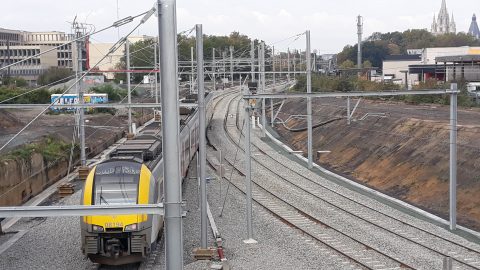 Some parts of the Belgian railway network are not well maintained and this puts passengers and railway staff at risk. Three consumer organisations have sounded the alarm in an analysis about overdue maintenance of parts of the Belgian railway network. Cancelled trains, overcrowded carriages and overtired personnel would also pose a risk. Railway manager Infrabel denies that safety is at stake.

According to consumer organizations TreinTramBus, Navetteurs.be and Test Aankoop, who spoke to the newspaper De Morgen, one of the problems is that many train journeys are cancelled. Last month, 2.7 percent of trains were reported to be out of service. As a result, travellers are crammed closely together on the train with the risk of corona contamination.

As reasons for the cancellations, the consumer organization mentions outdated train material and a shortage of personnel. According to Stefan Stynen, chairman of TreinTramBus, this has led to cancellations of up to 15 per cent on some trains.

The staff shortage at traffic control centres leads to overtiredness because they cannot take days off or breaks, which is also happening in the Netherlands. In addition, overdue maintenance means that trains have to run slower on certain sections of track. According to Stynen, this creates the risk of derailments.

Rail budgets have been under pressure for some time now

In a reaction, Infrabel spokesperson Thomas Baeken says that the “operational investment budgets have been under pressure for some time”. On top of that, the railway manager had to implement a number of cutbacks.

According to him, railway safety is not at stake. “We will absolutely not allow safety problems to arise,” he says. “What is in play is that there are various speed limits on the rail network. We do that partly to spare the infrastructure, but sometimes it also involves new infrastructure that has to be run in.”

He says that all rail assets are “closely monitored”. “If any safety issue arises then we will take immediate action. He says this can be done by setting a speed limit and, in the worst case, by closing a railway line.

The railway manager is currently in talks with the government about railway budgets. He is not very hopeful about this. “We will soon have to make do with the resources we have. The finances are under pressure and we will have to take up the challenges.”

The staff shortage is also caused by an ageing population, which leads to employees retiring. According to him, there is no safety problem with the control of train traffic. The Traffic Management System EBP, which Infrabel works with, catches human errors caused by work pressure. “This system ensures that most of the train control happens automatically. It prevents an employee from carrying out an action that would endanger train traffic.”

In 2022 the railway manager will start a large-scale recruitment campaign for train controllers. As in the Netherlands, recruiting train controllers is difficult, says Baeken. “The challenge is very great to replace employees who naturally leave because of their retirement. Many companies are fishing from the same pond. In addition, these people also need to be trained. Not everyone finishes the training for various reasons.