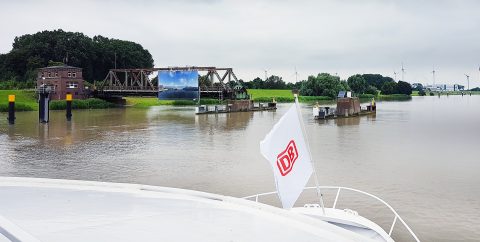 Deutsche Bahn has started dismantling the heavily damaged railway bridge over the river Ems, which has long been a bottleneck for Dutch-German cross-border rail traffic between German state Niedersachsen and province Groningen in the Netherlands.

Until 2015, a railway connection between Oldenburg in Germany and Groningen in the Netherlands ran via the Friesenbrücke. In that year, a barge collided with the bridge and it was so badly damaged that no train traffic has been possible since.

Construction of the new bridge is due to start in April next year, but before then, the existing track will be demolished. This will be followed by the demolition of the old bridge. It took almost six years before work started. Various options were examined. Instead of repairing the current bridge, a completely new one will be built. The new bridge should be ready by 2024 and will be one of the largest swing bridges in Northwest Europe, with a passage width of over 50 metres. This will allow for both train traffic and shipping. Besides train traffic, pedestrians and cyclists will also make use of the new bridge.

International public transport is handled by buses since the the incident in 2015. Train passengers can travel up to Weener by train and have to change to a bus to Leer. The total travel time is therefore 20 minutes longer than before. There is also a direct express bus between the Dutch Groningen and Leer. Annually around 255,000 border travellers are inconvenienced by the situation.

Once the new railway bridge has been built at the end of 2024, daily trains will again run between Groningen and Leer in Germany. There will also be room for an extra express train on the route. In the initial plans, trains would only be able to cross the new bridge to a limited extent, because Meyer Werft, one of the largest shipyards in Germany, would have to use the bridge for its ships. This would run counter to the plans of the province of Groningen to realise a fast train connection between Groningen and Bremen, as part of the Wunderline project.

The new solution takes both train traffic and shipping into account. In addition, the new bridge will be safer, reducing the risk of collision by ships. Although Deutsche Bahn assumes 2024, according to German media a report from the German Court of Auditors is circulating that the new Friesenbrücke will not be opened until 2030. Also, the original budgeted costs have increased from 66 to 125 million euros. Previously, there was talk of more than 96 million euros.