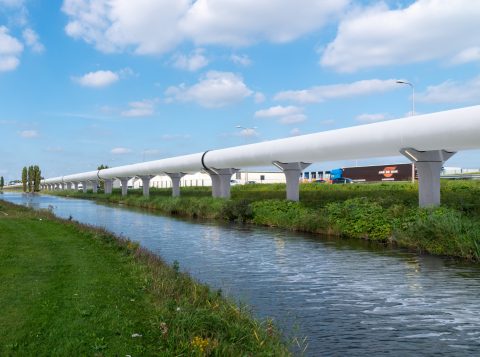 A hyperloop network for freight between North and South Holland can lead to economic benefits and a significant CO2 reduction. That is one of the main conclusions from a study by Dutch company Hardt Hyperloop.

Hardt Hyperloop, which started as a team of students from the Technical University of Delft, sees great opportunities for the logistics sector to make use of this sustainable and rapid means of transport. Transporting goods by hyperloop has a positive economic impact on the logistics sector, and significant improvement in air quality by reducing trucks on the road, the company states. It would also free up capacity on the current infrastructure.

Dominik Härtl of Hardt Hyperloop who led the Cargo-hyperloop Holland study explains: “We approached this research differently from previously performed hyperloop studies by directly involving the future users of the system as well as other key stakeholders. For this project we established a collaboration of 35 stakeholders from the private and public sectors, including some of the largest Dutch exporters from the horticultural and fresh food industry.

“They not only provided crucial input to the product requirements but also contributed to selecting the locations of the hubs as well as the route alignment. The project largely follows the A4 motorway, which connects cities such as Amsterdam, The Hague and Rotterdam. The A4 is crucial to the economic performance of this region. However, it also ranks among the most congested in The Netherlands.”

But, to leverage the full potential of economic benefits, the implementation of the entire Cargo-hyperloop Holland corridor is recommended. By optimising logistic processes and the introduction of hyperloop transport services, the project can generate benefits of about 3.2 billion euros. Comparing the benefits and costs with each other, shows that the project delivers a net present value of almost 2 billion euros and has a Benefit to Cost ratio of 2.62.

The study also examined various sections of the corridor individually to assess their viability as a pilot. Here, the connection between the Greenports is particularly promising and shows strong economic performance even as a stand-alone route. Härtl: ” A Greenport route could serve as a technology demonstrator and show how hyperloop would function during commercial operations. In turn, this route could help to create public support and also encourage people to travel by hyperloop by demonstrating its safe operation.”

A very important result of the research is that the realisation of Cargo-hyperloop Holland contributes to a substantial reduction of CO2 emissions. Härtl elaborates: “In the calculations, we took into account the construction of the infrastructure and the associated hubs.

“Even then, we can achieve a large net positive effect of reducing 0.6 million tonnes CO2 after 30 years of operations. The hyperloop is therefore the answer to the growing demand for sustainable solutions for (high-speed) transport of goods while also being able to create a system for transporting people in the near future.”

The research also shows that building a hyperloop network for freight contributes to reducing many of the negative side effects associated with the logistics sector. “Think of fewer accidents, less noise, and less congestion at a time when not all freight transportation will have to be carried via the highway,” Härtl explains.

In 2030, by only realising the corridor, it could already mean that almost 1,100 fewer trucks would need to use the A4 every day. With further expansion of the hyperloop network in Europe, hyperloop could replace over 2,500 trucks daily in 2050 and offer a sustainable alternative to flights within Europe.

Investment that pays off

The construction of a hyperloop network requires a substantial investment. Härtl: “The costs for the project are estimated at approximately 1.5 billion euros. This is far less than the road investments made and planned for the region in the recent past.

“In return, the economic gains are significant. For example, it gives the industry a boost and provides employment for at least 13,000 people. Together with the CO2 savings and improvements in transportation time and reliability that can be achieved, it makes hyperloop a very good investment.”

Saving “0.6 million tonnes CO2 after 30 years of operations” multiplied by damage costs of e.g. 500 Euro/ton would lead to climate benefit of 300 mio. Euro. And much less, if a quicker conversion of the road alternative to non-fossil fuel was assumed.

Conclusion: The benefit is not really relevant compared to the estimated investment costs of 1.5 billion Euro.