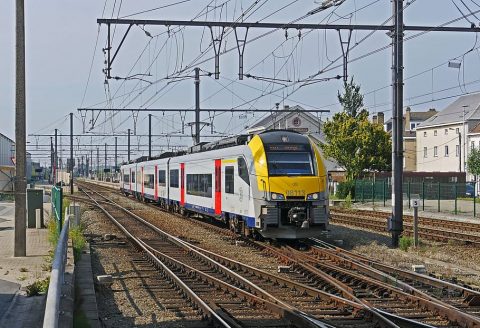 The Belgian coalition government reached a budget agreement last week. Railways receive 250 million extra in the next three years.  Most of this will be invested in infrastructure, to further develop rail freight transport. The Brussels-Luxembourg line also receives attention and the government is investing in night trains.

The budget agreement provides for 26 investment projects, including the Belgian railways, which will receive almost 250 million euros. These amounts are to be added to the 365 million euros provided in the context of the European recovery plan, making a total of 615 million euros. This amount does not take into account the significant Covid compensation, due to a drastic fall in sales of national operator NMBS/SNCB, while supply remained almost at its maximum.

The details of the distribution of this amount within the two Belgian railway companies, SNCB and Infrabel, have not yet been finalised. But it can already be said that the infrastructure seems to be rather well rewarded.

181 million euros will be used to develop freight transport, by investments in infrastructure, such as connections to some factories or measures taken to lengthen some yard tracks to accept 750m trains. The port areas are set to benefit from major infrastructure improvements, for example in the North Sea Port area and in the Zeebrugge area.

Part of the budget is also to be spent on “Axe 3”, which consists of the L161 and L162 lines linking Brussels to Luxembourg. The term Axe 3 refers to the 1990s government documents, stating to clarify the necessary investments axis by axis, and no longer in general. 42 million euros are provided for this route, in addition to the budget for the Brussels-Ottignies RER project (suburban trains), which is another project on the same line.

The Brussels-Luxembourg line has a total length of 226 kilometres and passes through Namur, Libramont and Arlon. The route is winding and has more than 150 curves on Belgian territory alone. This explains the relatively low reference speed (130 km/h) and the presence of numerous reduced speed zones. On the initiative of the Belgian and Luxembourg governments, major modernisation work has been underway since 2007, including a future conversion of the 3kV catenary to 25kV alternating current. Other work concerns signalling with the adaptation of the automatic blocks to achieve the necessary warning distances for a reference speed of 160 km/h.

However, there are looming troubles: energy prices. For the SNCB, the country’s largest consumer of electricity, the initial electricity budget for its bill was 100 million. It could see its energy bill increase by 14 million for 2021 and 20 million for 2022, i.e. an extra 34 million euros.

The plan also includes 2 million to encourage new service providers to enter the night train business. This very special sector does not always cover its costs, but the Austrian operator ÖBB has been able to demonstrate that with a certain business model it is possible to establish quality night train services.

However, some subsidies are deemed necessary, as the Dutch have done for a four-year period for the Vienna-Amsterdam night train (subsidised by the Netherlands with 6.4 million euros). Night trains are one of the instruments for achieving the climate objectives of Belgium, and therefore of Europe.