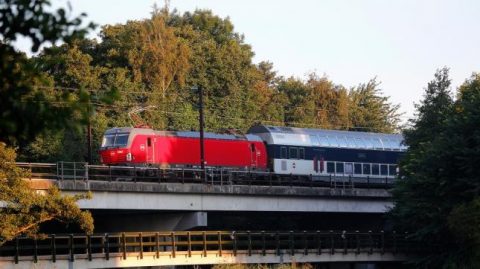 Danish infrastructure manager Banedanmark has set up the last overhead lines between Ringsted and Næstved, and the line is ready for DSB and other train operators to deploy electric locomotives. The line is part of Banedanmark’s work to improve the connection to the future Fehmarnbelt tunnel, which will be  a shortcut to Germany.

Banedanmark is upgrading the entire section between Ringsted and Rødby on the southern coast, so that the line will be ready to be part of the upcoming traffic corridor to Europe when the Fehmarnbelt tunnel is finished.

“In addition to electrifying the course, we have also upgraded it by e.g. to perform curves. This means that the trains will be able to run at a higher speed on the route, and this will be felt by passengers in the coming years”, says Banedanmark’s project director for the Ringsted-Femern line Klaus Studstrup Jørgensen.

DSB uses electric locomotives produced by German Siemens that emit neither diesel nor NOx particles. They have a higher top speed and can accelerate significantly faster than the old diesel trains. In addition, they will provide a more reliable and stable train operation, as they can drive 37,500 kilometers without having to undergo a service check at one of DSB’s workshops. For the old diesel trains, this only applies to 5,000 kilometers.

“Our new Vectron locomotives offer a significantly better experience for customers, the driving is more comfortable, the locomotives are more climate-friendly and less noisy”, says Per Schrøder, Director of Operations of Danish State Railways (DSB). “Therefore, we are pleased that Banedanmark has completed the electrification between Ringsted and Næstved, so that we can gradually deploy the new climate-friendly electric locomotives on the line. When we have replaced all our old diesel locomotives with the new electric locomotives around the turn of the year, we reduce CO2 emissions by 27,000 tonnes and particulate matter from train operations by 60 percent per year.”

In December, Banedanmark will complete the first stage of the upcoming traffic corridor between Ringsted and Nykøbing Falster. Thereafter, Banedanmark will continue to upgrade the line between Nykøbing Falster and Rødby. The entire line between Ringsted and Fehmarn will be double track all the way, and fitted with ERTMS. The entire connection , which is financed by A / S Femern Landanlæg and the EU, is expected to be completed in 2029.