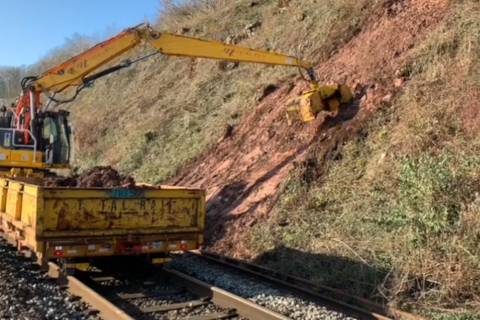 Network Rail has announced a 25 million pound (28 million euro) investment to secure the future of what they describe as a critical cross-border transport link, serving freight operations in both Wales and England. Details of the multi-million-pound plan show how the infrastructure agency plans to safeguard the railway line, increasingly ravaged by climate change and extreme weather.

The Newport-Gloucester line, which connects South Wales with England’s West Country, Midlands and the North, has been identified by Network Rail as one of the sections of the UK rail network most at risk to climate change disruption. As a mixed traffic line of strategic importance, Network Rail have taken the decision to invest heavily in a programme of upgraded earthworks and infrastructure remediation.

Running alongside the wide tidal channel of the Severn Estuary, the line is exposed to rain, wind and sea. Network Rail say more frequent extreme weather has seen the line devastated by five major landslips in the last two years alone. “This has led to extended closures of the railway and temporary speed restrictions, delaying more than 200,000 trains”, said an NR statement.

Services have been disrupted on several occasions because of the issues NR seek to address with this programme of works. “This also impacts essential freight services”, said a statement. “With forty-three freight trains passing through every week, moving steel, petrol, and construction materials.” The route also serves intermodal ‘Tesco trains’, keeping supermarkets stocked with essential supplies.

With the long-term viability of the line at stake, Network Rail engineers have developed a multi-million-pound plan to the protect the railway’s future. Work is due to begin in summer 2022 and will include the removal of more than 30,000 tonnes of material from the cliff face. A state-of-the-art mesh and bolt system will then be installed alongside three miles of track, stabilising the rock face and preventing landslips from affecting the track below.

Network Rail is working closely with train and freight operators, carefully planning the work to minimise disruption, while delivering the project as safely and quickly as possible. “We’ve seen a huge increase in extreme weather events across our network in recent years”, said Bill Kelly, route director, Network Rail Wales and Borders. “Climate change is happening here and now. Across Wales and Borders – from the Conwy Valley to the Welsh marches and Severn Estuary – we’re responding by building a more resilient railway. As well as saving taxpayers’ money and reducing delays for passengers and freight – we’re protecting this vital Welsh transport link for generations to come.”

“This is one the busiest and most important freight routes in Wales and Borders”, said Jess Lippett, senior route freight manager, Network Rail Wales and Western. It’s really important to the economy. As we saw through the pandemic, this route really is a lifeline, and the current shortage in HGV drivers means it’s playing an even more vital role.”

A ‘mesh and bolt’ system will be installed alongside three miles (5 kilometres) of railway, using over 1000 soil nails, drilled to a depth of up to 10 metres. 9,000 metres of mesh will be installed and 30,000 tonnes of spoil removed from the bank. This will stabilise the cutting, creating a safety net to prevent falling debris from reaching the track below. The Newport Gloucester line is also an important diversionary route, maintaining a direct rail link between South Wales and London when the Severn Tunnel is closed. The project represents the biggest investment in the Newport-Gloucester line since it was opened in the 1850s.