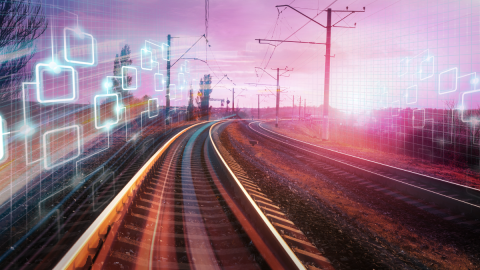 Network Rail has awarded a contract to a consortium led by Thales to develop and trial Fibre Optic Acoustic Sensing (FOAS) technology. This effectively creates a virtual microphone every few metres.

The FOAS technology will be enriched with data fusion to enhance the ‘listening’ capabilities of optical fibres, of which there are already around 20,000 kilometre running alongside Britain’s railways. The implementation of this technology has the potential to enhance remote condition monitoring of assets and provide valuable data to improve train performance and reduce disruption for passengers.

In a recent interview with RailTech, Tim Flower, Chief Intelligent Infrastructure Engineer at Network Rail also talked about Fibre Optic Sensing, explaining: “sensors are fitted on lineside telecom fibers, so they can hear any localised noise to the fiber.” According to him, the system is currently in its infancy, but has already been quite successful with train tracking, and has many possibilities. “With clever algorithms, this could distinguish whether a person is approaching a level crossing, a train, or in case of a wheel flat“, said Flower.

The awarding of the contract follows a Design Contest launched in November 2020, led by Network Rail in collaboration with Dutch rail infrastructure manager ProRail, which challenged over 40 suppliers of different sizes to come up with proposals for a funded 12-month outcome-focused trial of FOAS, IoT sensors and smart CCTV cameras, amalgamated through intelligent data fusion and processing. Companies were required to address four areas of operational challenges on the railway:

The trial work with Thales’ successful bid will be conducted at Network Rail’s RIDC Melton test track, and on the mainline railway from Melton Mowbray to Leicester. The tests will begin in Autumn 2021. Thales will lead a consortium comprising small and medium companies to deliver different parts of the technology.

The Design Contest also formed part of an existing agreement between Network Rail and ProRail to collaborate on research and development opportunities. The two companies signed a Memorandum of Understanding in March 2019 that illustrated a commitment to work together and share expertise to solve challenges faced by the railway. ProRail will also provide sensors and a financial contribution and develops algorithms in its Data Lab. Later this year, ProRail will validate these algorithms at its own test location between Breda and Tilburg in the Netherlands.

The data could also be a valuable feed into the Rail Data Marketplace (RDM), recently announced by the UK Government. This platform to share rail data across the industry and enabling a step towards a future data-driven railway is to be introduced next year. The RDM is expected to create new collaboration opportunities for developers, tech firms, and the rail industry.