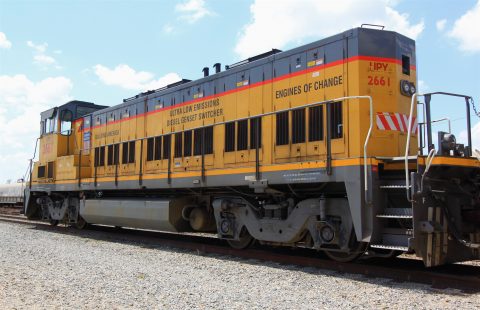 Shell and Texaco joint venture Equilon Enterprises has been awarded a 4 million dollar grant by the California Energy Commission for the development of a multimodal hydrogen refuelling station. It will be designed to accommodate both ships, trucks and hydrogen trains.

The refuelling station is to become a showcase of fuelling options for the various modes of transportation and is to be installed near the Port of West Sacramento by mid-2023.

Equilon is also involved in the development of the hydrogen train destined to make refuel at the station, Sierra Northern Railways’ Hydrogen Switcher Locomotive. The rail company is currently in the proces of repurposing an old Switcher Locomotive RP20BD to that end. Its drive train will comprise two 200 kW hydrogen fuel cells, hydrogen storage tanks for 222 kilograms of hydrogen and a 500 kWh battery pack.

Equilon, operating as Shell Oil Products US, has received grant funding from the California Energy Commission before. It is currently rolling out a network of 60 hydrogen refuelling stations across the state of California.