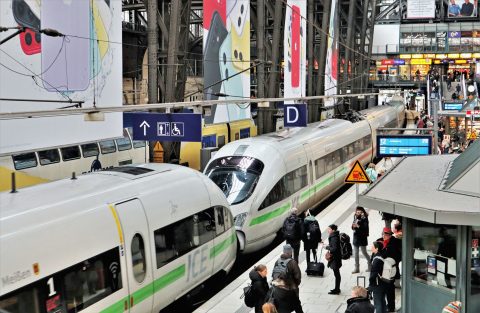 DB expects busiest weekend of the year after strike

Passenger trains in Germany continue as usual after the strike of the GDL union ended at 2.am on Friday. When the strike for passenger traffic began on Wednesday, only 25 percent of long-distance trains could run. Around 300 DB Cargo freight trains were slowed down, throwing the supply chains off balance.

In local transport, the offer on both days was around 40 percent of the normal schedule. However, there were major regional differences here. Train driver’s union GDL went on strike due to a labour dispute with DB.

For the upcoming weekend, DB is expecting the busiest days in rail traffic of the whole year. The postponement of many trips to Friday and the following days because of the GDL strike, plus summer holidays in twelve federal states as well as the midsummer weather throughout Germany and Central Europe mean that many long-distance trains can be expected to be busy in the next few days.

The strikes also had a large impact on rail freight operations. Beforehand, DB Cargo openly expressed fears that GDL’s strike could have devastating effects on the global supply chain. In total, 300 freight trains were slowed down, 190 coming at a standstill. Some trains from abroad could not be accepted at the borders. For instance, the train running from China to Tilburg, in the Netherlands, could not cross Germany and reach its final destination. Most probably, other China-Europe trains also faced the same issue.

The strike affected mainly the connections to Poland and the Czech Republic, while disturbances in Mannheim also posed problems for traffic to and from Switzerland and Italy.