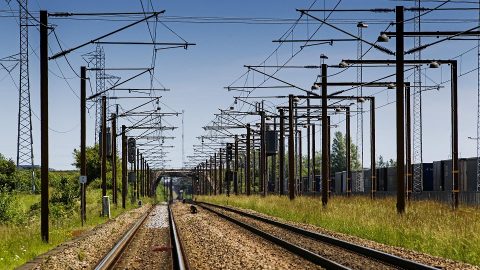 The great plans to drive more often and faster on the Dutch track in the future comes down to whether there is sufficient traction energy available, advocates Peter Boom, director of Rail Asset Management and Digitisation at Royal HaskoningDHV. The company uses Digital Twin software for the network analyses.

In the context of research into the capacity requirement for traction energy, the company carries out so- called network analyses on behalf of Dutch infrastructure manager ProRail. In this way, it should be possible to determine whether the capacity of the traction energy meets the expected demand in 2030.

RoyalHaskoningDHV uses Digital Twin software for the network analyses. This creates a virtual model of something ‘outside’, which you can then fill in with data and bring it to life, explains Peter Boom. The software is used, among other things, to analyse and optimise proposed changes in the timetable. “By linking our simulation model to the calculation models for traction energy supply, we can balance future supply and demand”, says Boom.

“It is known that the grid is reaching capacity limits. There are occasional problems with substations, copies have to be replaced or relocated and the numbers of substations have to be increased. After all, the demand is increasing. For example, Dutch Railways NS will be using new rolling stock that has a stronger acceleration capacity and therefore a higher energy demand. Failure to meet demand will cause disruptions and delays. Nobody benefits from that”, says Boom. Over the next four years, rail manager ProRail will replace or expand the technology in more than half of its 250 substations. They will start with the traction transformers.

ProRail argues for a structural approach to the power problem by increasing the overhead line voltage on the rail network from 1500 to 3000 volts. This intervention saves energy and trains can accelerate faster with 3kV and thus save time. Higher speeds of up to 200 kilometers per hour may also be possible.

“That is indeed part of the question. On the one hand, we analyse what the supply will be like in 2030, and whether it will meet the energy requirement. At the same time, studies are looking at increasing the overhead line voltage. Many studies are now done at 3kV. We are also performing that as part of this story.”

This is all the more important because it can fulfill the promise of the European Rail Traffic Management System (ERTMS) – more trains closer together. “As long as you don’t do anything about the power supply, just rolling out ERTMS is not enough to make the capacity promise”, says Boom.

Other applications of Digital Twins are also conceivable. This makes it possible to analyse the expected maintenance requirement. It can also be useful when making a business case, for example for the use of hydrogen trains, which in the Netherlands will be used in the province of Groningen, says Boom. He will further elaborate on the application of Digital Twin software on 21, 22 and 23 September during the Intelligent Rail Summit in Bilbao, Spain.

“How can we also set up an ecosystem in other countries to realise Digital Twins? You shouldn’t want to do that alone. I would like to see us work together with parties abroad, to see what we can very cleverly copy from what we do in the Netherlands to other countries”, concludes Boom.

Peter Boom speaks about Digital Twins and its uses for rail at the Intelligent Rail Summit on 21-23 September. Take a look at the programme for more information. Download the free magazine about Intelligent Rail with more interviews here.