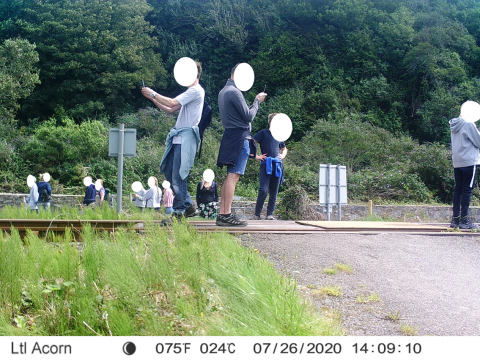 Hashtags like #railphotography and #railwayshoot have escalated dramatically in recent years – with more than 1 million uses on apps like Instagram, Snapchat and TikTok. In Wales, this has contributed to a rise in illegal access to level crossings in Wales, with 433 serious incidents since the beginning of the pandemic. This announced Transport for Wales, Network Rail and British Transport Police (BTP) on Wednesday.

To warn people of the risks, a new safety message is shared in an emotive new film, inspired by a series of real-life incidents. Released alongside CCTV footage of everything from casual “railway selfies” in Harlech to a full-blown photoshoot on the tracks in Neath, it’s hoped that the news will help the three Welsh rail partners to curb the growing trend ahead of the summer school holidays.

It’s all part of the “At What Cost?” campaign of Transport for Wales, National Rail and the British Transport Police.  The safety campaign is designed to raise awareness of the very real dangers of level crossing misuse in Wales and the UK. “Messing around on level crossings – including lingering to take photos – is illegal and extremely dangerous, says Richard Powell, Inspector at British Transport Police. “You could be taken to court and face a 1,000 pound fine. Trains approach almost silently, so if you’re distracted, you won’t notice until it’s too late.”

The campaign illustrates some of the motives people cite for taking risks at level crossings – whether to save time, show off in front of friends or take an ‘Instagrammable’ photograph.The poem is narrated by members of railway staff from the three organisations – each of whom have personal experience in dealing with near-misses and even fatal incidents at level crossings.

Jody Donnelly, train driver at Transport for Wales said: “Over the years, myself and many of my colleagues, with station, driver and conductor roles, have had to deal with hundreds of frightening and sometimes tragic occurrences at level crossings.

“People seem to think that the worst won’t happen to them ― but if you’re caught short at a level crossing, it simply isn’t true. Unlike cars, trains can take hundreds of metres to stop when travelling at top-speed, meaning that a decision to nip across the tracks can be fatal. I have no doubt that our campaign will help to save lives this summer. I hope it will allow myself and my team to rest a little easier knowing that despite social media trends, our customers are educated on the very real dangers of level crossings.”

Compared to other European countries, the UK has a quite low number of level crossing accidents per million train kilometres. According to ERA, a common feature of the countries with the highest accident rates is a low population density and low railway traffic volumes. These conditions perhaps provide less incentive for a comprehensive management of level crossing safety. The UK’s higher population density could be a reason that it’s higher on the country’s priority list. 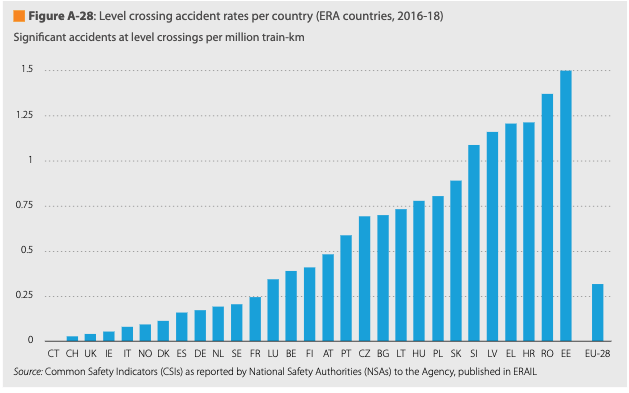 The UK’s level crossings might be relatively safe, but every accident is one too many, and the UK rail campaign shows that level crossing safety remains an important issue that needs attention. As inspector Powell puts it: “Take care around level crossings. No photograph is worth the risk to you or the consequences for your family and any bystanders.”

Watch the campaign video below: