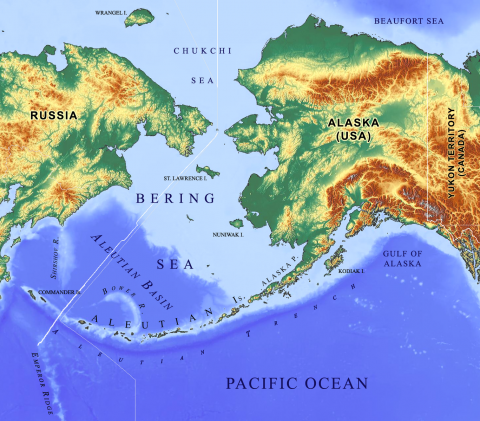 An underwater railway line from the USA to China: is it realistic?

InterBeringA 13,000km-long railway line from China to the USA, running partially underwater to cover the Bering Strait. It would be the finishing touch of the Belt and Road initiative, as it would connect the world by rail.  The project has been discussed since 2014, but seems to have more people talking than actually building.

Constructing the China-Russia-Canada-America railway line could provide capacity for up to 100 million tons of freight, or 8 per cent of world freight cargo each year between Europe, Russia, China, Japan, South Korea, Canada and the USA.

Moreover, it would enable passengers to travel between the USA and Russia in just a little over 20 minutes, if high-speed trains would run on the network. It is also dubbed the Global Land Bridge, as it would connect the world, advocate those proposing the project.

Technically, the project is very challenging, the costs are sky-high and maybe most importantly, the political relations between the USA, Russia and China are not at the very best. What is more, it is not entirely clear who is to construct the tunnel, as various parties seem to have their respective ambitions.

Technically, the crossover at the Bering Strait is the most challenging task. If an underwater tunnel would be constructed here, it would be the longest in the world, extending over 103km. In comparison, the Channel Tunnel, currently the world’s longest, is 50km long. InterBering, an Alaska-based company, seems to be actively working on the project.

The project would actually involve construction of three parallel tunnels under the Bering Strait, along with sections of railway linking to the rail systems on each of the two continents. InterBering writes. “Two tunnels would accommodate two-way traffic and consist of two levels: the bottom part for slower moving cargo and passenger traffic, and an upper level for high-speed rail trains. The third tunnel would function as an emergency tunnel and be placed in the middle.”

InterBering says to “integrate information and management processes with particular focus on the organisation, financing and construction of an interhemispheric Bering Strait tunnel and joining the railways of two continents, North America and Asia”. According to the company, the project would take 12-15 years, at an estimated cost of 35 billion US Dollars.

However, that includes the underwater link alone. In order to make this a global land bridge connecting China and the USA, new infrastructure needs to be laid, as there are currently a lot of missing links. On the Russian side, the closest terminus lies 3,000km away, while in Alaska, the project would require some 1,200km of new rail line. What makes things more complicated, is that Russian and American railways use different track gauges, writes Ed Peters in the South China Morning Post.

It is this missing infrastructure that makes the project a huge financial challenge. The estimated total costs are around 200 billion US Dollars, which according to the critics, is out of proportion. As the shipping routes already exist, it is more viable to continue shipping by ocean, is the often heard argument of opponents.

Although Interbering claims to “actively bring about an historic agreement between the Governors of the State of Alaska (USA) and Chukotka Autonomous Okrug (Russia) making this proposed rail tunnel a future reality, China seems to be on a completely different page.

As mentioned, China announced its plans to build the China-Russia-Canada-America line in 2014. At the time, engineers from China claimed to be in talks with Russia about beginning the line. Moreover, it is currently realising the world’s first underwater bullet train, which would extend from Ningbo, a port city near Shanghai, to Zhoushan, an archipelago of islands off the East coast. Many consider this a test project, to see whether they could realise the longer Bering Strait Tunnel.

The Ningbo-Zhoushan tunnel is 77km long, of which 16.2km is situated underwater. Although the underwater section is shorter than the Channel Tunnel, the novelty is that it will facilitate high-speed rail traffic. To be precise, it will have a Maglev train, levitating above a magnetic track as it is propelled along at high speeds. And this is not a dream project, as it is already underway.

Political will from all sides

China and Russia are not unlikely to cooperate in this project. After all, they already share the longest railway line in the world: the Trans-Siberia Line. The two countries have worked together very closely over the past few years to form a bridge between Europe and Asia, and a railway line to the USA would be an extension of this effort.

However, the willingness of the USA to work with Russia and China on this megaproject is less likely. Currently, the relationship between the USA and Russia is not at its best, and as China is taking over as the dominant economic player in the world, the USA may not be so eager to facilitate this growth.

At the same time, the benefits will be for all the countries involved. “The Bering Strait rail and tunnel project can help enhance and expand prosperity for the 21st Century by linking the world’s greatest industrial nations with the vast untapped mineral resources of the Arctic”, said Alaska’s Governor Wally Hickel.

In order to realise the project, the countries involved will all have to chip in, and all be involved. Before consensus is reached and funding is made available from all sides, the China-Russia-Canada-America line is likely to remain a dream project.

2 comments op “An underwater railway line from the USA to China: is it realistic?”

Track gauge isn’t a problem as the Chinese are building gauge changing trains for the Trans-Siberia Line and for China to Pakistan and India on broad gauge railways.Spanish Talgo train manufacturer invented gauge changing trains which uses hydraulic rams to adjust the distance between the wheels that can run on wider Spanish Iberian and French gauge tracks.Napoleon invaded Spain so in the past different gauge trains had to terminate at Canfranc station near the border between Spain and France.

A two-level tunnels seems nonsense to me, just as a high-speed passenger link between two largely uninhabited areas Eastern Siberia and Alaska. Reduce the project to freight-dedicated and a few tourist trains on the same route, and it should be further evaluated. What is the position of that Bering tunnel corporation therein, profit on ways of right?