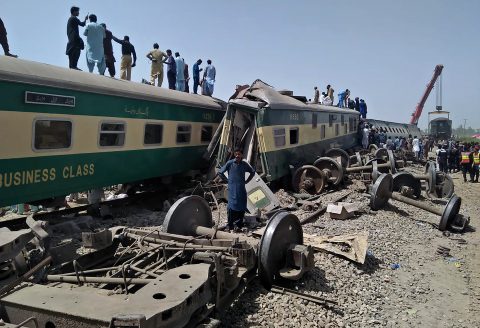 At least 63 people have been killed after two trains collided in Pakistan on Monday morning. More than a hundred people are said to be injured. The clash happened in Ghotki district of the southern Sindh province. The salvage operation has now been completed and the track would be reopened on Wednesday, the railway manager said.

According to railway officials, about 1,100 passengers were on board the two trains. The salvage operation is completed, but the death toll could still further rise with some of the victims in critical condition. It was very difficult for the rescue workers, with the help of the military, to do anything for the victims in the twisted train compartments.

It is not immediately clear what caused the derailment and the subsequent collision. The cause of the accident is still under investigation. A Pakistan Railways spokesman said to Reuters that several carriages of the first train fell across the adjacent track after the derailment in the Ghotki district.

The second train, coming from the other direction, then smashed into them, he added. “The driver tried to apply emergency brakes but the locomotive hit the infringing coaches”, Pakistan Railways said in an initial report.

“The track has got issues on several points, and the coaches are old, some as old as 40 years,” railway official Khalid Latif told Geo News TV.  “I’ve told high ups several times ‘please do something about it'”, he said.

Pakistani prime minister Imran Khan said on Twitter that he was shocked by the horrific accident, and that he is ordering a comprehensive investigation into railway safety faultlines.