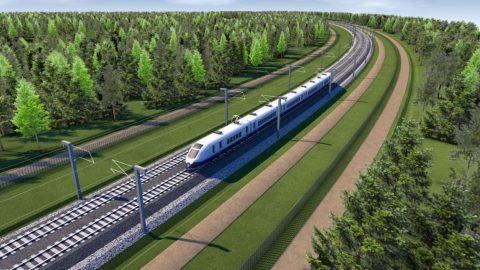 A consortium of engineering company Italferr (of FS Italiane Group), Deutsche Bahn and the Spanish Idom will carry out the electrification of the new high-speed line Rail Baltica. It is the largest single contract for an electrification project in the world. The contract has a duration of 7 years, with a value of 25 million euros.

A total of 870 kilometres will connect Estonia, Latvia and Lithuania to the European railway network with a new high-speed line. The project is moving ahead and the electrification (25 kV AC) has been awarded. Italferr will take care of the design, preparation of tenders, technical assistance to the customer and construction management for the electrification of the line, FS Group announced on April 27. They will also carry out activities regarding the methods of supplying the energy to the infrastructure to enable signalling.

Electrification of the line

Rail Baltica AS launched the tender for the electrification engineering services in April 2020. Further components of the contract include traction substations (adapting voltage to train traction features), the overhead catenary system, and the electrification control command system.

The scope of the tender is divided in two phases. During the first phase, the engineering consortium will perform necessary technical studies such as advanced software simulation of the energy subsystem. Also, the technical architecture of the energy subsystem will be proposed and  the technical specification for the deployment contracts drafted. During the second phase, the consortium will be required to supervise the implementation of the design and construction works.

The project is managed by the intergovernmental agency RB Rail AS with a total investment of 5.8 billion euros,  financed 85 percent by the European Union. It provides 870 kilometres of new interoperable double-track high-speed line for the transport of passengers and goods. The line will have seven passenger stations and three new multimodal freight terminals, and further connections with ports and airports.