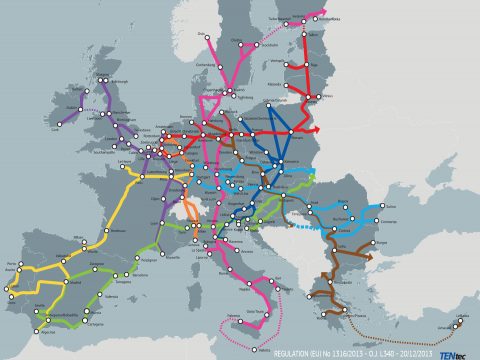 Rail infrastructure needs to be adjusted to the needs of intermodal traffic, and the revision of the TEN-T regulation is the ideal moment for such a change. That is the core message of the UIRR in its position paper to the EU legislators. According to the interest group, the current TEN-T network is in many ways outdated, not taking into account the large role intermodal traffic plays today.

Intermodal rail makes up half of European rail freight performance – this was confirmed in the UIC-UIRR Study on Combined Transport. The intermodal production system of rail freight has nearly doubled its share during the past decades. This phenomenon went largely unnoticed, as the market share of rail freight stagnated because of the declining conventional traffic, the UIRR argues.

In order to extend the capacities for intermodal traffic, there are several changes needed to be made when the TEN-T guidelines are revised. This is scheduled for October this year, and the European Commission is currently developing its revision draft. Interested stakeholders are encouraged to respond to the public consultation.

To better serve the needs of rail freight, the technical parameters for railway lines in the TEN-T Regulation need to be updated, says the UIRR. These parameters define the standards of the lines that are part of the TEN-T network, but do not always meet the needs of the intermodal sector. For example, the loading gauge should enable the passage of intermodal trains carrying 4-meter-high and 2,60-metre-wide refrigerated (craneable) semi-trailers.

“The profile gauge measurement and the loading gauge calculation for the maximum width and height of the train that can pass may be several decades old”, the company explains. “In some cases, the actual codification occurred well before 2,60 metres wide and 4 metres high (refrigerated) semi-trailers were permitted to circulate on European roads.” According to the UIRR, this can lead to unfortunate situations. In several instances, rail infrastructure managers even deny train path applications of operators for intermodal trains, just because the line codification does not nominally allow for the circulation of standard intermodal wagons loaded with these kinds of semi-trailers.

The TEN-T loading gauge parameter should be updated, but infrastructure managers should also be mandated to regularly reconfirm the existing codification based on empirical measurements. The frequency of such an exercise should be no longer than every 10 years, it argues.

An important reason to establish a freight dedicated network is because freight trains operate on a lower speed than passenger trains. The top speed of a freight train in general will not exceed 120 kilometres per hour. However, dual lines have a speed parameter of 160 km/h. Freight dedicated lines should have a speed parameter of 120 km/h, the UIRR argues.

In order to be part of the core network of the EU, intermodal terminals are currently required to have “an annual non-bulk freight volume over 800.000 tonne. However, this is difficult to measure as the cargo volume is not monitored and recorded by terminals; their unit of performance measurement is the number of units transhipped, which should be set at 40.000 for a CNC terminal, the UIRR states.

Moreover, the interest group would like to see that the TEN-T Guidelines also require innovative equipment in a terminal. Currently, they need to be equipped with cranes and other devices for moving freight. This should be extended to facilities as photogates with optical character recognition (OCR) capability. “This is especially important to mention in the revised Regulation as only this way will these kinds of investments qualify for financial assistance from the CEF Transport Programme.”

About the TEN-T network

The Trans-European Transport Network (TEN-T) is a Europe-wide network of railway lines, roads, inland waterways, maritime shipping routes, ports, airports and railroad terminals. The Core Network includes the most important connections, linking the most important nodes, and is to be completed by 2030.