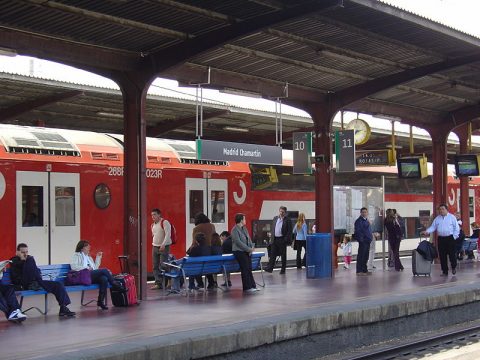 Spanish infrastructure manager Adif has launched a project to reform rail connectivity in Madrid and connect the stations Puerta de Atocha and Chamartín with a tunnel. With the planned expansions of the high-speed network and increase in passengers, the tunnel should ensure more capacity in the Spanish capital.

With the new concept of a ‘single station with two terminals’, Adif will link the two stations in Madrid by a new 7.3 kilometre-long high-speed tunnel, currently under construction. It will run alongside the existing conventional tunnel for commuter services. According to Adif, the project is essential to adapt both stations to the new capacity requirements of the city.

The tunnel will allow for high-speed trains to run between both terminals, uniting at the same time the North and Northwest HS corridors. It is expected that the rail traffic in Chamartín will increase by 40 percent both in commuter lines and high speed, adding up to more than 40 million passengers in 2040.

The tunnel will allow for high-speed trains to run between both terminals, uniting at the same time the North and Northwest HS corridors starting in Chamartín station with the rest of the corridors with destination to the South and East of the country, starting in Atocha station.

The Madrid Chamartín-Clara Campoamor station, in the north of Madrid, will also undergo an adaptation process. In various phases, the number of tracks will be expanded from the current 22 to 31, of which 13 commuter tracks and 18 high-speed tracks. This will accommodate the new traffic after the commissioning of new high-speed lines and the liberalisation process of the passenger market in the Spanish railway network.

As for Atocha station, in the south, the renovation project will take advantage of its location and proximity to the cultural and tourist attractions of the city to achieve a more accessible and functional station. In 2010, the reformation started with construction of the new arrivals hall. The second phase will now follow, including the underground construction of four new high-speed tracks and two platforms. This allows high-speed trains traveling to Chamartín to reach Atocha as well, through the new highspeed tunnel.

In the project plan, Adif has prioritised sustainability and connectivity with other means of transport, so that both terminals can offer all possible services to make the use of railways more attractive for citizens.

The design of the station adaptations will prioritise the use of bicycles, carsharing and the use of electric mobility, facilitating the installation of Ferrolineras (recharging points for electric vehicles powered through the electric railway system) and encouraging the use of more sustainable modes of transport.