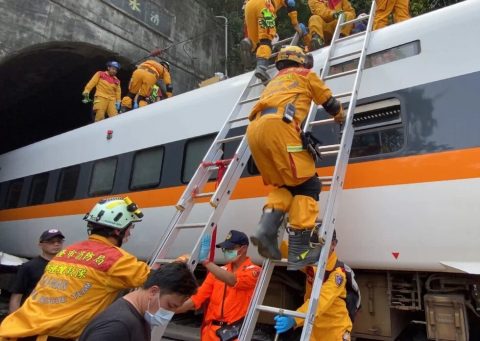 At least 51 people were killed by the derailment of a passenger train in Taiwan on Friday 2 April. It is the deadliest railway accident on the island in decades. The crash happened at the entrance of a tunnel, where the front of the train carrying 492 passengers was completely destroyed.
The train with 492 passengers on board hit a truck at Hualien just before a tunnel on Friday and derailed in the tunnel. The disaster killed 51 people and injured more than 200 people. The Taiwanese rail authority also released the names of 47 victims on Saturday, including three foreigners,  a 27-year-old Frenchman and two persons from the United States. There were also children. The other bodies have yet to be identified.

A female occupant said she felt a shock and fell to the ground. “We broke the window and climbed on top of the train to get out,” she told local UDN newspaper. Prime Minister Su Tseng-chang has expressed condolences to the relatives.

Vehicle on the track

The truck was parked on a construction site just above the railway line. The truck’s handbrake may not have been properly applied, causing the vehicle to land on the track. It is being  investigated whether the driver has not properly applied the parking brake or whether the brake was mechanically damaged. The site manager is suspected of negligence. He has been released on bail but is not allowed to leave the country.

The driver of the truck that was on the track in the deadly train disaster in Taiwan apologized in tears on Sunday. “I am very sorry and would like to express my sincere apologies,” the visibly emotional Lee Yi-hsiang told national television cameras. He also said he will cooperate with authorities in the investigation of the train accident.

Lee, 49, is an employee of the National Railways and regularly inspected Taiwan’s mountainous Eastern Railway due to potential landslides and other risks. He was interrogated last weekend and was released on bail pending further investigation.

Our UK correspondent Simon Walton says news of the disaster has shocked the world. “National news bulletins were interrupted in the UK on Friday morning”, he said. “In British terms, the accident happened at what would normally be peak-commuter time, and it has really surprised and saddened the public and the rail industry here. While Britain generally regards itself as among the safest railway operators in the world, we often look to the Far East and particularly to Japan and Taiwan for examples for best practice.”
American agency CNN, which normally leads with domestic news, cleared their front page to carry their coverage. The network ran dramatic pictures from inside the tunnel and eye-witness reports from the scene. “Scored dead” was the headline on RT – Russia Today, the global news service of the Russian state. Similarly, the People’s Daily of China carried extensive reports, including the now familiar “no signs of life” quote from the authorities on the scene.

“The BBC in the UK was among the first foreign news agencies to have a reporter cover the story”, said Simon Walton. “The only emotion in the UK is one of compassion for the victims. Although there was a fatal accident less than one year ago, which killed three people, there has been nothing of this scale in the UK for over twenty years. In 2001, in similar circumstances, a road vehicle and trailer was driven down an embankment in error, and caused the derailment of an express passenger train. Ten people died in that crash and almost 100 were injured.”
The last major train crash in Taiwan occurred three years ago. Then 18 people were killed and some 200 people were injured. The deadliest rail accident in the island’s history dates back to 1948, when 64 people were killed, according to the Apple Daily newspaper. Rail disasters in 1961 and 1978 killed 48 and 41 respectively.