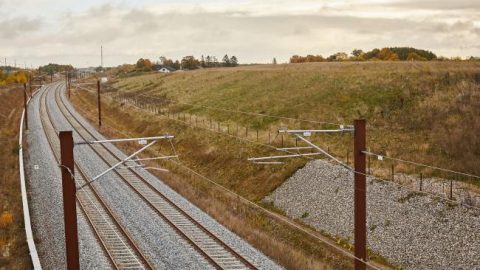 Banedanmark works on upgrading track to Fehmarn over Easter

Danish infrastructure manager Banedanmark is upgrading the railway between Ringsted and Rødby so that it has the desired capacity when the tunnel under the Fehmarnbelt is completed in 2029. The Fehmarnbelt connection to Germany is the largest construction building in Danish history and will be a gateway to Europe, giving commuters and passengers a modern railway with faster and climate-friendly trains.

Although it is a long time until the tunnel opens, the work of upgrading the railway is already in full swing. “Last year, Banedanmark carried out most of the work between Ringsted and Næstved, where we electrified the line, renovated tracks and upgraded Glumsø Station”, says Klaus Jørgensen, project director at the Ringsted-Femern track. “This year, the last works on the line will be completed so that electric trains can be used between Ringsted and Næstved later. In addition, we are continuing the work of upgrading the Ringsted-Femern line on the section between Næstved and Nykøbing Falster”.

The Ringsted-Femern line is one of Banedanmark’s largest infrastructure projects and consists of many different upgrades. The rails are being renovated in several places on the stretch and an additional 55 kilometre long track is being built between Vordingborg and Rødby, so that the track will be double-tracked all the way. Curves are straightened and railway embankments are reinforced so that trains can run at 200 kilometres per hour instead of the current 160 kilometres per hour.

The track is electrified with a new traction current system, so that electric trains can run in the future. A new signalling system will be rolled out, which in the long run will provide a more stable train operation with more trains on time. Several existing stations and platforms will be rebuilt and modernised and a completely new station will be established at Holeby. Fauna passages, toad fences and passages are being built for wildlife and the environment. The work is financed by A/S Femern Landanlæg and the EU.

On Saturday, March 27, 2021, a streak of track work begins that continues over Easter. In continuation of last year’s upgrades between Ringsted and Næstved, security technical work will be carried out at Næstved Station over Easter. At Nørre Alslev, Banedanmark will remove one of the tracks as part of the work on the rebuilding of the station, and at Nykøbing Falster Station, initial work will be carried out prior to a major track rebuilding later in the year.

In addition, work continues on electrifying the track. During Easter, work is done at Vordingborg Station, where, among other things. test excavations must be carried out to secure cables and wires in the ground before the work on mast foundations for the traction current systems begins. Over Easter, Banedanmark will also be working on installing and testing components for the ERTMS signalling system, which is currently being rolled out between Køge and Næstved and between Mogenstrup and Nykøbing Falster.

It is possible to install electric trains on the section between Næstved and Nykøbing Falster when the new Storstrømsbro is expected to be completed in 2024. By 2028 at the latest ERTMS will be installed between Ringsted and Næstved.