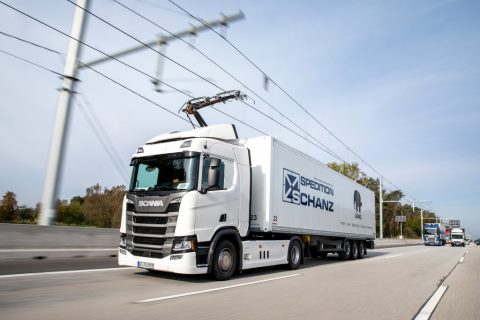 ‘Electrified highway with overhead wires ideal for the port of Rotterdam’

Catenary lines above on the motorway, where trucks receive electricity via a pantograph. If it is up to Siemens Mobility, freight traffic will head in that direction via the so-called eHighway. Erik Koopman, Business Development Manager at Siemens Mobility, explained the benefits in conversation with Dutch sister magazine SpoorPro on Wednesday.

The eHighway is not something of the future. In fact, the first routes have already been laid, namely in Sweden and Germany. On the A5 just below Frankfurt, a ten-kilometer stretch of motorway is fitted with a two-pole overhead line. There, the Technical University of Darmstadt and the Hesse State Tourist Board will be conducting field tests with the system until 2022. Specially prepared hybrid trucks from Scania are used for this.

“The eHighway was put on the map about ten years ago with the first tests north of Berlin. We have now reached the point where we are working on practical tests”, says Erik Koopman.

Not more expensive than diesel truck

The principle is relatively simple, says Koopman. “As soon as the truck detects the presence of the overhead contact line, the pantograph is activated. This supplies the electric motor with power. However, the power can also be used to recharge a battery pack.”

The big difference with the former trolleybuses is that these trucks can leave the eHighway, for example to overtake or to leave the highway. Depending on the type of truck, the rest of the journey will be on electricity or on a conventional combustion engine.

What kind of truck is desirable depends entirely on the customer. Carriers who frequently drive from A to B over a relatively short distance may be able to handle a fully electrically powered one. “Such a truck does not have to be more expensive than a diesel truck, manufacturers assure us”, says Koopman. 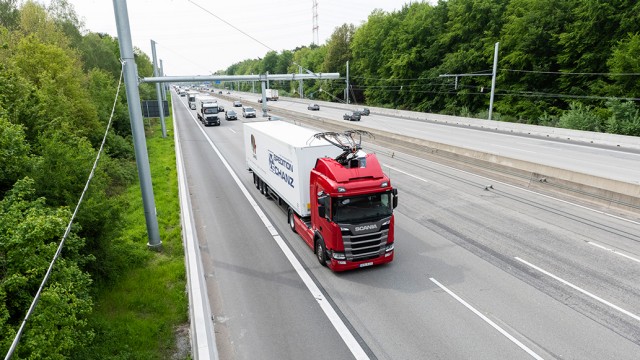 No decommissioning for construction

It is not necessary to overhaul the entire highway to construct an eHighway. Unlike in the case of railways, no decommissioning is required. “We can build most of the componentsnext to the highway. In time we will have to shut off the sevice road and the right-hand lane, but that’s it. ”

The fact that construction is relatively simple does not mean that the construction of an eHighway is an easy job. “The preliminary phase of construction in particular takes a very long time”.

The big advantage of the eHighway, according to Koopman, is that you can potentially reduce a lot of CO2 emissions. “Our experience in Germany has shown that if you provide 2 percent of all German roads with an overhead line, that is approximately 4,000 kilometers, you reduce 60 percent of the total transport-related emissions.”

The German Ministry of Transport is investing a lot of money in the project, which is also subsidised with European money. The ministry also shares its experiences with other ministries, including the Dutch Ministry of Infrastructure and Water Management, says Koopman.

“There is a lot of interest in other countries. Tests have already been done in places, while elsewhere there is enthusiasm for such tests with the eHighway. We therefore hope in time to be able to extend cross-border eHighways in order to connect countries. In the Netherlands, independent research and consultancy firm CE Delft has already indicated that heavy freight traffic can also be served with such a solution ”.

According to Koopman, the A15 between Maasvlakte and Ridderkerk would be the appropriate route to construct an eHighway. “You see quite a lot of traffic driving back and forth there. It’s not an extremely long stretch, so you could do that with a fully electric truck. ”

Koopman is clear about the costs. “An amount of 2.5 million euros per kilometer is considerable, but if you compare it with investments in, for example, charging stations for electric trucks or filling stations for hydrogen trucks, then the eHighway is the cheapest solution.”

Erik Koopman will give a presentation about the eHighway on the Tech Stage of RailTech Europe on Tuesday 30 March from 2.45 to 3.15 p.m. Visit the event website to view the programme and register for free.

This technology has existed many years already: when I was a child (the 1950’s) I sat in bumper cars on the fair, with an overhead net/grid for electric energy. So I started promoting this technology among Logistics students – and now I am glad somebody finally picked up the idea.