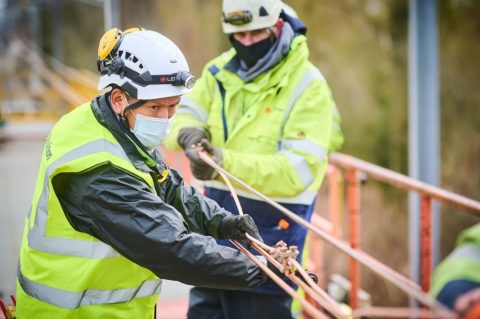 Electrification of Belgian line near Dutch border ready in June

Infrabel has entered the final phase of the electrification of railway line 19 between Mol and Hamont in Belgium. The railway infrastructure manager expects that the 33-kilometer-long railway line can be put into use in June. In the future, the route should be extended to the Dutch town of Weert, but the Ministry of Infrastructure and Water Management in the Netherlands has yet to make a decision on this.

In 2018, Infrabel started with a phased electrification per track section. All 830 catenary posts have been installed on the 33 kilometre long section of railway line 19. The total of 200 kilometers of new cables and wires have now been installed, except for a few kilometers. Last weekend, the electrical connection was made between railway line 19 and the existing overhead line in Mol, and between Pelt and Hamont the catenary wires are being rolled out further.

Spread over the railway line, Infrabel has also built three new traction substations in Lommel, Neerpelt and Hamont, which will be operational at the end of March. They convert high voltage into usable voltage for train traffic. The converted traction current runs from the substation via the overhead lines to the trains so that they can run electrically. When the works are completed in May, the electrified railway can be safely powered up after further checks and tests.

Connection with the Netherlands

The next step is the extension and electrification of the line on the Dutch section between Hamont and Weert. But a feasibility study commissioned by NMBS completed in February, shows that the latter is not profitable. For example, the potential of travellers on the connection in both directions together would be around 1,000 travellers per day and would therefore not be profitable. This is partly due to (personnel) costs that are necessary for the service and uncertainties concerning the availability of trains.

Nevertheless, the Belgian Minister of Mobility Georges Gilkinet and the Parliament do not want to give up the connection yet and in consultation with (demissionary) Dutch infrastructure minister Cora van Nieuwenhuizen and the steering group Netherlands-Belgium that monitors cross-border traffic.