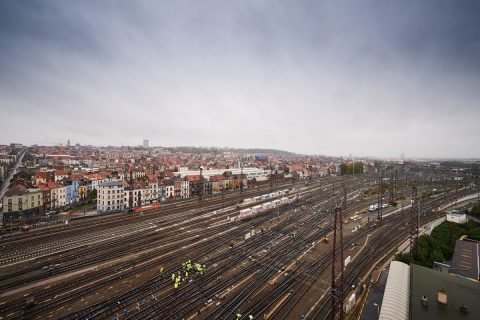 Infrabel installed ETCS on 30 percent of the main rail net

Belgian infrastructure manager Infrabel has equipped 1.915 kilometres of track with train control system ETCS up until January 2021. This makes up 30 percent of the 6.399 kilometres of the main rail net, which Infrabel plans to equip with at least ETCS Level 1 by 2025. The last installation was in the night of 28 to 29 January, when Infrabel installed ETCS Level 1 with Full Supervision on 32 kilometres of track between La Louvière and Binche in the south of the country.

ETCS is the core signalling and train control component of ERTMS, the European Rail Traffic Management System. ETCS continuously calculates a safe maximum speed for each train, with cab signalling for the driver and on-board systems that take control if the permissible speed is exceeded. In combination with GSM-R, which is used to communicate between trains and the railway network operating centers, it comprises ERTMS. GSM-R is already installed on the Belgian rail system and available on all the lines of the Infrabel network.

Infrabel has planned the roll-out of ERTMS step by step for the entire rail network. Their ambition is that trains only drive with ETCS in Belgium by the end of 2025. The deployment master plan states which type of ETCS each railway line will have. For the Belgian network, Infrabel opted for a combination of ETCS level 1 Full Supervision, ETCS level 1 Limited Supervision and ETCS level 2 Full Supervision.

In the table below and map above the current state of the Belgian railway net with ERTMS installation is displayed.

ETCS Level 1 can be used on top of the existing national signalling system and provides cab signalling. Route data is sent to the ETCS unit on board of the train. With the received data, the maximum speed as well as the breaking curves are calculated. ETCS Level 1 Full Supervision, which is currently mostly installed by Infrabel, requires supervision to be provided at every signal, in other words: the on-board computer is continuously supervising the maximum permitted speed and calculating the braking curve to the end of movement authority.

ETCS Level 1 Limited Supervision allows for only a part of the signals to be included, and allows to tailor the installation of equipment only to points of the network where the increase in functionality justifies the costs. As supervision is not provided at every signal, the train driver must still look out for trackside signals. For this reason, the level of safety is not as high, as not all signals are included and there is still reliance on the driver seeing and respecting the trackside signalling.

The header of this article needs correction. It’s ETCS what has been installed, not ERTMS.

ERTMS is the integrative EU policy / regulation, and – as we all know – policies cannot be installed :)