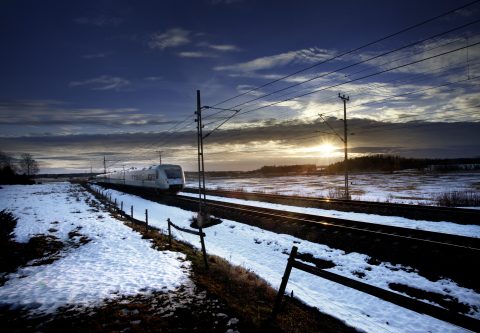 The Swedish Transport Administration Trafikverket is planning to build a new main railway line between Stockholm and Malmö, which will free up capacity on the existing Southern Main Line. Trafikverket considers six alternative proposals for the route between Hässleholm and Lund in southern Sweden, one of the first parts of the new railway. The construction of the section is planned for 2027–2029.

Trafikverket has the government’s task of building new main railway lines between the Swedish metropolitan regions. The three projects Ostlänken (Linköping-Järna), Gothenburg – Borås and Hässleholm – Lund constitute the first sub-stages of the new main line and are planned to be part of a common system.

The program Ostlänken (the part through Linköping’s urban area) recently had some delays due to a change in the government assignment. One of the reasons is that the corridor will be extended to the south. A proposal and consultation for the choice of the location of the railway will run until the spring of 2022, initially the choice was to be made by the end of 2020.

The new railway between Hässleholm and Lund provides faster journeys in southern Sweden and helps to relieve the Södra railway line. The relief provides more time for preventive maintenance, which leads to a more durable and robust railway system with better punctuality, while at the same time the number of local trains can increase on the Södra line.

When the entire main line is completed, people will be able to travel between Stockholm and Malmö considerably much faster than today’s 4 hours and 25 minutes. The possibility of driving more goods by rail also increases as space is freed up on the Southern Main Line.

During the period 20 January – 16 March, the project’s third consultation will be carried out to review where the railway is best located. The Swedish Transport Administration’s purpoe with the consultation is to inform about the project, to present the proposals for location alternatives that have been developed and to receive comments. The consultation includes a total of six draft location options. The location investigation for Hässleholm – Lund started in the summer of 2019 and is expected to be completed in 2022. Planned construction starts 2027–2029.

Due to the current pandemic, the consultation is being carried out digitally. An interactive map where it is possible to leave comments is available on the project’s website and there are presentations that show how the location options have been developed.