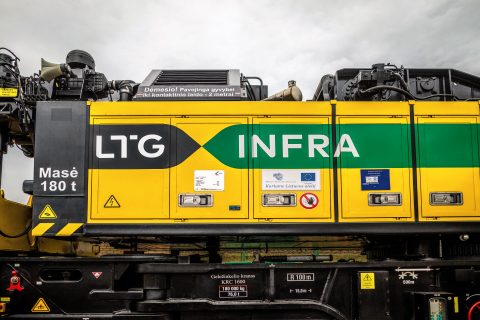 LTG Infra, Lithuania’s railway infrastructure manager, has set ‘ambitious goals’ to improve the capacity on its railway network, which is mostly single section and has several congested lines. The company has carried out an in-depth analysis of railway capacity utilisation and will initiate changes in legislation for more efficient network management. Also, LTG Infra is upgrading traffic management and other systems with the same goal of more capacity.

“With the liberalisation of the country’s railway market, we are redefining many things, including procedures, traffic management and capacity allocation”, says Karolis Sankovskis, CEO of LTG Infra. “In neighbouring countries, these processes have taken decades, but we are setting ourselves ambitious goals and we believe that we will significantly increase the efficiency of the network in the near future. To achieve this goal, we are performing three groups of actions.”

In particular, LTG Infra has prepared and submitted to the Ministry of Transport and Communications proposals for the improvement of the regulation of capacity allocation set out in the Railway Transport Code (GTK).

Most of the Lithuania’s network is single section, meaning only one train can run on sections. Highly intensive traffic takes place on the main railway line of the country Vilnius-Klaipėda. In order to meet the needs of passenger and freight companies, a working timetable is drawn up each year, a process known as annual capacity allocation.

Once established, the timetable is followed by all users of the railway network – passenger trains, freight trains, as well as railway repair plans and the movement of commercial trains.

Next to changes in legislation, the company is simultaneously improving the information systems that manage train traffic in Lithuania. The company has already developed a pilot capacity utilisation monitoring tool that allows weekly analysis of the situation and immediate action. Also, a new application processing system is being implemented, and the current traffic management systems are being updated, both on main roads and at railway stations. Improving information systems is a time-consuming process, as it involves not only the development of new systems, but also their compatibility with existing systems.

Thirdly, all these changes – both the modernization of information systems and initiatives to change legal acts – are intended to create an efficient and transparently managed Lithuanian railway network, which will be used by various participants in the railway market. In the first half of this year, it is planned to present these innovations to road users, as well as to invite them to a table discussion in order to create a business model that meets everyone’s expectations.

Circumstances beyond the company’s control must also be taken into account when developing a capacity utilisation system, emphasises LTG Infra. The Lithuanian railway network transports a lot of cargo from Eastern countries, and it is not usual to transport cargo on a ‘Swiss punctual schedule’. Also, important freight from these markets arrives not only out of schedule, but there are also discrepancies in train lengths,

The Lithuanian railway network must be able to adapt and create flexible conditions for business, for example, transporting goods from the Chinese market. It is not worth expecting that containers from China will be transported across the Eurasian continent with minute accuracy, says LTG Infra.

“Lithuania must be a flexible, reliable and constantly adapting direction for the movement of goods”, says Sankovski, the head of LTG Infra. “It depends not only on the growth opportunities of the railway market participants, it is also relevant for the rest of the freight transport chain, and especially for the port of Klaipeda.”

These are aspects of rail traffic that are independent of the actions of the infrastructure manager. Therefore, LTG Infra says every effort will be made to create a dynamic system on the country’s railway network by improving the system in discussions with the regulator and other stakeholders.

With the entry into force of the 2020-2021 working timetable, carriers have already been subject to tougher sanctions for unused capacity. On heavily congested lines, it is closely monitored whether the carrier is keeping its promise to make efficient use of available capacity. The upfront fee for the access package has been increased, and at the end of the year the capacity utilisation efficiency will be assessed and the fee for allocated but unused capacity will be calculated.

“We are aligning with the experience of the best countries of the European Union in the organisation of the work, and we are moving forward at a high speed. We are implementing both technical and information innovations, we are also working with legal regulation. I believe that the process will be smooth and we will soon have a railway system that meets the European leve”‘, says the head of the company.

LTG Infra is currently implementing important infrastructure improvement projects that will increase the efficiency of the network. The main railway section of the country Vilnius-Klaipėda will be electrified, as well as two 10 and 13 km long doubles will be built in this section, which will significantly increase the capacity.

The company is also responsible for the development of the European Rail Baltica project in Lithuania. Rail Baltica will provide a fast rail connection between the Baltic capitals every two hours.