After cleaning work on the snow-covered tracks around Madrid, several train services are restored, such as Madrid – Barcelona. All railway traffic to and from Madrid for all types of train services was suspended on Saturday due to the heavy snowfall of storm ‘Filomena’. Infrastructure manager Adif has requested the collaboration of the Military Emergencies Unit to clean the accesses to the Madrid freight terminals.

The cold and snowy storm Filomena that has been sweeping the east and center of the Iberian peninsula for several days continues to cause large alterations in the railway infrastructure. Since the suspension of rail services on Saturday, operator Renfe has restored several rail services throughout the day on Sunday and the following days.

The Minister of Transport José Luis Ábalos held a press conference on Monday and confirmed that some rail connections of the Cercanías de Madrid and the High Speed ​​Railway have begun to resume. Regarding high-speed, he reported that the goal is that Tuesday starting at noon all high-speed long-distance and medium-distance connections are in operation.

The rail traffic between Madrid and Barcelona was restored on Monday, but Tuesday morning there were was an electrification failure which affected the high-speed and medium-distance line that connects Madrid-Zaragoza-Barcelona once again. The problem was fixed and rail traffic restored again after several hours. The latest update on the reestablishing of rail services in the region can be found on the Renfe social media.

In order to restore rail traffic, infrastructure manager Adif carries out cleaning works to rid the tracks of snow on sections and certain stations of the high-speed network, as well as the Madrid suburban area. In addition to large amounts on snow on the tracks, the snow and ice accumulated on the infrastructure causes problems in the catenary and in the capture of energy in the trains. Once the intensity of the snowstorm had somewhat subsided Saturday afternoon, Adif’s infrastructure maintenance personnel started the cleaning works.

Prior to reestablishing rail services, it is mandatory to carry out explorations with locomotives equipped with snowplows to ensure that the routes are clear of obstacles. In these types of situations, trees can fall on the tracks due to the weight of the snow. The locomotives for explorations were located in the Renfe workshops, which were initially also difficult to access due to the storm. 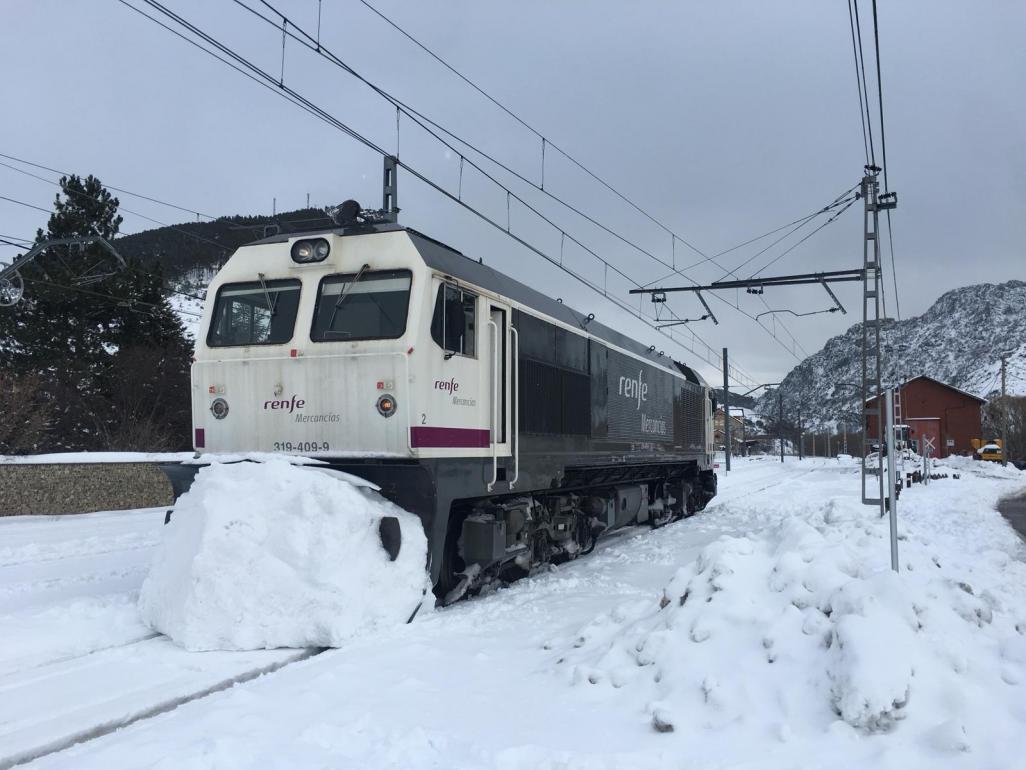 Once the examinations by locomotives are carried out on a railway line, Adif assesses the possibility of restoring the service. In any case, the restoration will be carried out gradually and in somewhat degraded conditions compared to usual, with speed limitations depending on visibility and weather conditions. This can result in travel times being longer than usual.

In addition to the reestablishment of the passenger service, Adif also works in the Madrid freight terminals of Abroñigal and Vicálvaro to be able to give continuity to the freight train traffic. In this case, in addition to the problems in track changes, it is also necessary to ensure the access of the trucks to the terminals for the transfer of goods and to give continuity to the distribution. For this, Adif has requested the collaboration of the Military Emergencies Unit (UME).