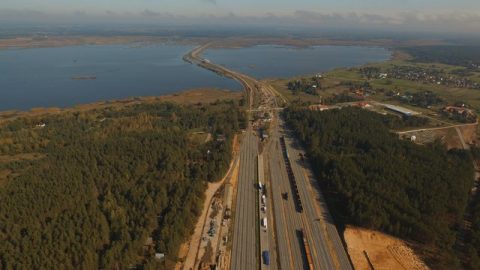 PKP Polish Railway Lines is modernising several broad-gauge railway lines in the Podlaskie province. The works are important for the improvement of freight transport between Poland and Belarus, as well as between the east and west of Europe. With the investment of over 350 million Polish złoty (77 million euros), broad-gauge cargo trains (1,520 mm) will return to operate on railway line 57.

Freight trains from Belarus are already running to Poland on new tracks  one some parts and a renovated bridge on the Siemianówka reservoir. With the investments, PKP Polish Railway Lines revitalises sections of three different Polish railway lines in the in the Podlaskie Voivodeship (province).

It is a significant railway project as the works at the broad-gauge railway line Kuźnica Białostocka – Geniusze (line 57), connecting Poland and Belarus, will increase the capacity of the route for cargo trains. After the repair is completed, broad-gauge cargo trains (1,520 mm) will return to the line following the period of absence lasting more than ten years. This investment will also enable to build a freight transfer terminal at Geniusze station.

The modernization of broad-gauge railway lines is an important investment for the improvement of freight transport between Poland and Belarus, as well as between the east and west of Europe. The transport of goods across the border will be faster and more efficient, and more trains will be able to run on the tracks at speeds of up to 60 kilometres per hour.

Freight stations will be able to receive and service heavier and longer trains with loads up to 245 kN/axle (25 tonne) and up to 1050 metres in length. More goods on the tracks means fewer trucks on the road and more environmental benefits, as well as greater opportunities for reloading points in the province.

PKP PKL modernises the railway line 57 between Kuźnica Białostocka and Sokółka and Geniuszy next to the passenger trains running. Over 10 kilometres of wide track with new rails and sleepers has already been laid since the investment started in June 2020. Over 800 wagons of crushed stone have already been used on the construction site. Thanks to the investment, it will be possible to restore train traffic on the Sokółka – Geniusze section, which has been out of service since 1992. On this section, old rails and sleepers were already dismantled.

The revitalisation of railway line 57, together with the works on railway line 923 on the section Bufałowo Wschód – Bufałowo have a total value of around 200 million złoty (44.4 million euros). The modernisation is co-financed by the Regional Operational Program of the Podlaskie Voivodeship. Completion of these works is planned for next year. The contract for designing and executing building works to implement these two projects is performed by a consortium composed of Intop Warszawa, PBIiK and PUH Rajbud.

As part of the modernisation, the Polish Infrastructure manager will replace a total of 27 kilometres of tracks and renovate or rebuild 16 engineering structures. Traffic safety will be ensured by the reconstruction of 16 road and rail crossings and the installation of modern railway traffic control devices.

On the railway line from the border with Belarus to Zabłotczyzna (railway line 59), 20 kilometres of the main track have already been replaced. The new rails should ensure a lower noise level. The renovation covered 13 engineering structures, including bridges and culverts. The safety of rail and car traffic was ensured by the reconstruction of 12 road and rail crossings.

At the station of Siemianówka, the control room has been renovated. It is equipped with modern computer traffic control devices, which will increase the level of safety and enable the handling of a greater number of trains, according to PKP. Work is underway on the construction of track lighting at the Siemianówka, Mikłaszewo and Zabłotczyzna stations, as well as electrical power works. The major part of the works on this line is scheduled to be completed in March 2021, while the final completion of the project is scheduled for the fourth quarter of 2022.

The modernization of the railway line 59 is carried out under two projects, the revitalisation of the railway on the section from the state border to Chryzanów (78.9 million złoty), and investment works at the border crossing Siemianówka -Swisłocz (78.8 million złoty). The first is co-financed by the Regional Operational Program of the Podlaskie Voivodeship and the Railway Fund. The Siemianówka-Swisłocz works are financed entirely from the state budget, falling under a wider project called ‘Improvement of the technical condition of railway infrastructure in border crossing areas’.