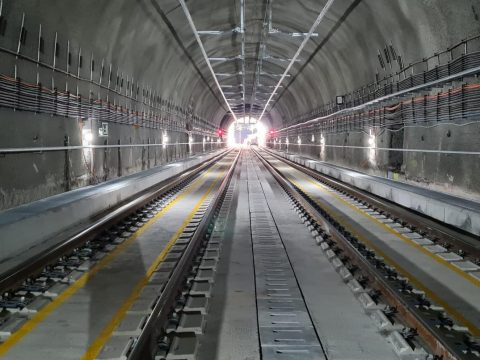 In Catalonia, Spain, Adif has finished railway works on the Martorell-Sant Sadurní section, part of the Mediterranean Rail Freight Corridor. The Martorell tunnel is adapted to the European standard and has a third track for more capacity. The works of the last 5 months account for 25 million euros and solve the problem of different track gauges.

The Spanish railway infrastructure manager Adif calls the finalisation of the section a ‘milestone of great importance for a strategic infrastructure’. Martorell-Castelbisbal of which the section is part of is a double track corridor with heavy commuter train traffic, which was a drawback for freight trains, limiting its potential development. The railway works on the Castellbisbal-Martorell section, and by extension up to the Vila-seca Nudo, represent an investment of 64 million euros, of which approximately 25 million euros have been executed in these 5 months.

Operator Renfe has restored the railway service of the R4 line of Rodalies de Catalunya in the Sant Sadurní – Martorell section, and freight traffic recovers their usual routes on this line. The initially scheduled date for the works to be finished was November 16, but the project had some delay due to factors unrelated to the execution of the works, such as the strike by the circulation personnel of the Adif command post in Barcelona as well as effects by Covid-19.

The Door to Europe

The renovation and adaption of the railway section are fundamental because they will connect the Spanish railway network to the European one, solving the problem of different track gauges. It is part of the railway investments that are being carried out throughout the Mediterranean Corridor, from Algeciras in the South of Spain to the French border, the so-called Door to Europe.

Commuter services will also benefit substantially thanks to the availability of new and better infrastructures and facilities, which will result in an increase in the benefits, efficiency and effectiveness of rail operations.

In the Martorell tunnel (1,065 meters long), the lowering, renovation and adaptation of the structure to European technical specifications has been carried out in to be able to build a third track and adapt it to the standard width (1,435 mm). In order to adapt to the new grade that allows for the interoperable gauge, the depth of the tunnel has been lowered to 2 metres and a new counter vault has been built. An emergency exit and evacuation corridors have also been built and the track and catenary between the Martorell station and the Seat fork has been renewed.

Progress is also made in the restoration of the old Costablanca tunnel, 810 metre long and currently without service, to incorporate it into the exploitation network and create a third 2,100 metre traffic lane that will connect the Castellbisbal station and the Llobregat viaduct, located near Martorell.

After the assembly of 9,870 metre of track (2,370 metre on slab and the rest on ballast), the placement of 10,000 metre of overhead lines, and of the security and communications facilities and civil protection the mandatory tests have been carried out. This is to verify the optimal state and operation of the new facilities and their integration into the Centralized Traffic Control of Barcelona.

On several parts of the section tracks and overhead lines have been renewed, and turnouts and sleepers in stations were replaced. In total 700 people have worked on the railway operation.

Video of one of the finished tunnels (Adif)

The Castellbisbal-Martorell section is a key crossroads, as it is the point where the Barcelona bypass connection with Europe is located, the route to the port of Barcelona and the connection with the rest of the peninsula and the Mediterranean Corridor. The Mediterranean ports will be even more competitive, and the industrial fabric of Camp de Tarragona, Penedès and the Martorell area will benefit, since it has companies with great potential that will be able to export and import their products by rail, increasing its international competitiveness and environmental sustainability.

The increase in the transport of goods by rail will also help reduce CO2 emissions, in a section where more than 15,000 heavy vehicles circulate on the road every day. The works to implement the standard gauge in the Castellbisbal-Nudo de Vila-seca section are co-financed in the 2007-2013 period by TEN-T grants and in the 2014-2020 period by the “Connecting Europe” Mechanism (CEF).