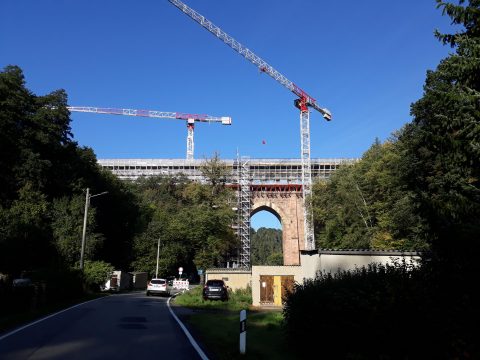 Deutsche Bahn has finished the renewal and refurbishing of the 170-metre long Heiligenforn railway viaduct located in Waldheim, Central Saxony Germany last week. According to DB this renovation has allowed the reoperation of two train tracks on the Riesa-Chemnitz line between Waldheim and Mittweida. The federal government and Deutsche Bahn invested around 13 million euros in the project.

The construction of the 40 meters high viaduct began in October 2019. The Heiligenborner viaduct was built with retaining walls and earthwork. It is also is part of the six bridges carrying the Limmritz – Waldheim section of the Riesa – Chemnitz railway line. The railway line is known as the ‘Bankruptcy mile” due to its high construction costs of the six bridges which caused financial difficulties in 1848. “We are pleased that the viaduct built-in 1852 has been renovated to continue for the next few decades,” says Elke Hering, DB project manager.

In the next year, remaining work will be done such as scaffolding work and the restoration of used building equipment areas. Moreover, works such as the disposal of rock and soil, creating internal access to the bridge and the external connection of the draining will be carried out next year.