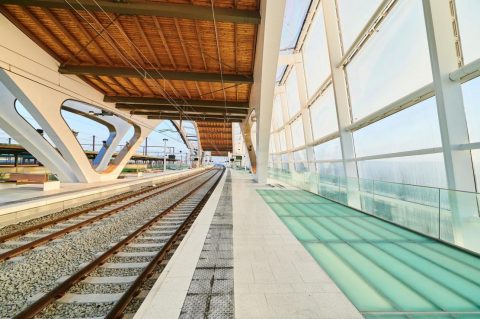 Belgian railway infrastructure manager Infrabel will carry out the finalising works on the Mechelen Railway Bypass in the upcoming weeks. On December 14th, operator NMBS will take the associated platforms 11 and 12 into service. The extra tracks and platforms should increase the capacity around Mechelen and it is an important infrastructure upgrade for the completion of the high-speed rail network in Belgium.

The Railway Bypass is a new ring track around the Belgian city of Mechelen of 3.2 kilometers long. It includes two additional tracks and two new platforms at the rear entrance of the station, which is covered with an arch structure and equipped with lifts and escalators for the travellers.

The Bypass connects to the Diabolo link, by which people can easily travel to Brussels Airport. The Rail Bypass will further optimize mobility to and from the Belgian capital and ensure a smoother flow on the strategic rail link Brussels – Mechelen – Antwerp – The Netherlands.

The Mechelen Rail Bypass is not only important for domestic, but also for international train traffic. This new infrastructure in Mechelen is the last missing piece of the puzzle for completing the high-speed network in Belgium, says Infrabel. In the future, after the platform tracks 7, 8, 9 and 10 have been completed, high-speed trains such as the Thalys, Eurostar, and Benelux will be able to travel at 160 kilometres per hour.

The final part of the Rail Bypass immediately marks the beginning of further renovation works. After 14 December, the transformation of the station itself will start, whereby platforms 1 to 10, among other things, will be gradually renovated.

Unfortunately, you fell for Infrabel’s fairy tales.
This bypass is far from completed. Still missing is the flyover north of Mechelen to connect the new and the old railways lines (25 and 25N). Without this flyover, line capacity hardly increases.
Only Mechelen has 2 extra platforms, which gives some (much needed) flexibility for the engineering works in the station.