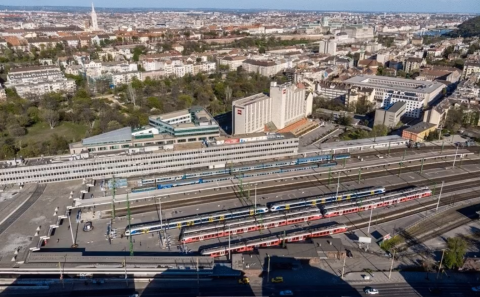 The Budapest Development Agency (BFK) has signed a contract on Sunday for the start of feasibility study of a new railway tunnel under central Budapest.  This project will create extra capacity for more rail services to Budapest from its suburban region and major cities in Hungary. “A huge step towards a new era of urban and suburban rail in Budapest”, says David Vitézy, CEO at Budapest Development Agency (BFK) who announced the news.

The study which will be done together with FŐMTERV Civil Engineering Design Pte. Ltd, SMA & Partners and UNStudio. The tunnel will be built on the summary basis of the study after 2022. BFK is a government agency focusing on state funded urban development projects in the suburban area of Budapest. BFK works in close cooperation with all municipalities, including the City of Budapest.

The CEO explains that the preparatory task is creating a rail infrastructure that will connect the area of Déli pályaudvar with Nyugati pályaudvar. Currently, Budapest’s historic railway network has stations which are creating bottlenecks. This project’s main aim provides more capacity to reduce traffic congestion and harmful environmental factors.

The study consists of conducting a conceptual review of all the routes in the South and Westerns stations and creating a future for them. There will be investigations done on how necessary it is to increase capacity, the price, routes, stations, and the technical designs to connect railways from all parts of Hungry through the centre of Budapest.

Főmterv Zrt, a Hungarian engineering company, plans to design the railway infrastructure in Budapest by designating and controlling the preparation of the study. SMA & Partners Ltd, Swiss consulting and software company for railway systems, will create and model a new timetable concept based on a railway tunnel. Dutch architectural, urbanistic and city design office, UNStudio, will use their references from their past projects such as Doha metro, Arnhem railway station (Netherlands) and Galvani bridge ( Budapest) to help towards the design of the tunnel.

The project is a sustainable alternative for the current increasing car traffic that pollutes the city air with two-thirds of CO2 emissions. The solution to reducing this through railway development by knitting transport and its suburban regions. Renovating the current infrastructure and increasing capacity with stations and tracks will hopefully influence people to stop using their cars and switch to rail.

The number of suburban train commuters can be doubled through operating more trains and connections to the capital, The development of the South Circle Railway can provide 90 trains to operate per hour, but for this to happen a railway tunnel will be needed. This idea was supported by the Agglomeration Railway Strategy in Budapest.

Although the current suburban railway in Budapest has been renewed with the arrival of new motor trains and lines that are under reconstruction. The government has placed the decision in 2018 that an underground strategy should be developed to connect the South and West Railway stations. This development will essentially contribute to Budapest’s infrastructure.