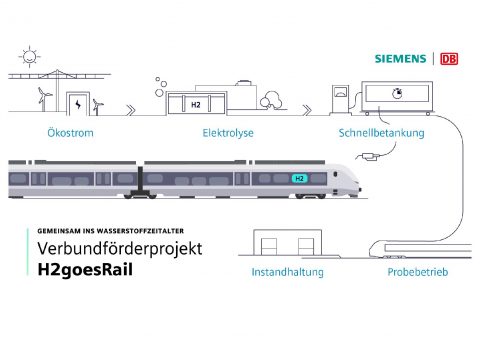 DB and Siemens are joining forces into developing the first complete hydrogen system for climate-friendly mobility. In one year, the companies will collaborate to operate trail tests for the hydrogen train and special petrol station. H2goesRail will be funded by the Federal Ministry of Transport and Digital Infrastructure (BMVI). The project is planned for 2024 and has been calculated to save around 330 tons of CO2 emissions and run a 120,000-kilometre distance.

DB will covert and dedicate one of their maintenance workshops in the Tübingen area, supported by the Ministry of Transport in Baden-Württemberg. “The fact that we will produce the hydrogen on-site from green electricity and will refuel the train as quickly as a diesel train shows that the climate-friendly transport turnaround is possible,” says Professor Sabine Jeschke, DB board member for digitization and technology.

DB will be focusing on infrastructure development targeting the new hydrogen filling station. The hydrogen will be generated by electrolysis in the filling station. Hydrogen propulsion is the combination of hydrogen fuel with oxygen from the air through a fuel cell, creating electricity and water through an electrochemical process DB Energie will produce hydrogen with the help of green electricity while equipping the DB plant in Ulm to service the train.

The process of refuelling the train will take 15 minutes, which is just as long as refuelling a diesel unit. As DB’s traffic runs on tight schedules, hydrogen technology gives competition to diesel fuel. “Fuel cell propulsion with hydrogen can become a climate-friendly alternative to diesel propulsion, especially on non-electrified routes. Whether powered by catenary electricity or hydrogen – it is crucial that the energy comes from renewable sources. Baden-Württemberg likes to be a pioneer for modern, sustainable rail transport. It is an essential part of the traffic transition,” says Winfried Hermann, Minister of Transport Baden-Württemberg.

Siemens Mobility will build the vehicle basing it on the two-part version of Mireo Plus multiple unit. The unit will be equipped with a newly developed hydrogen drive, which is equally powerful as its electric multiple units counterpart. The Mireo Plus H will have a distance range of 600 kilometres and low life cycle costs, due to its low maintenance and repair works.

“The train is characterized by a high drive power of 1.7 MW for up to 1.1 m / s² acceleration and a top speed of 160 kilometres an hour. This innovative technology will make operational hydrogen-powered rail transport faster, more efficient and more environmentally friendly,” explains Michael Peter, CEO of Siemens Mobility. “Hydrogen propulsion is an emission-free and progressive form of propulsion for trains that enables rail transport to be decarbonised and makes a significant contribution to achieving our climate targets.”