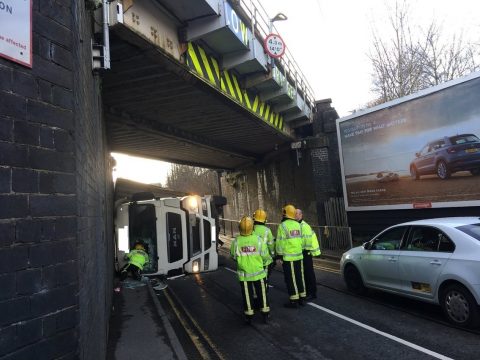 Network Rail reveals the newest ‘most-bashed bridge’ with the relaunching of the ‘Lorries Can’t Limbo campaign’ to prevent annual spike incidents. Statistics have shown that railway bridges are struck five times every day on average across Britain, which causes half a million minutes of delays for rail passengers.

As larger vehicles are expected on Britain’s roads with Black Friday and Christmas coming up, Network Rail has revealed the most-struck bridges in the country. The campaign is to remind drivers and operations of their obligations to prevent bridge strikes. Financial statements in 2019 and 2020 have shown an 11 per cent decrease in incidents, but bridge strikes still remain a dangerous and costly concern.

The most-bashed bridge in Britain is Watling Street bridge on the A5 in Hinckley, Leicestershire. It has been struck 25 times in the last year, which caused unnecessary delays and safety risks for rail passengers, motorists and locals. The runner up coming into second place is the Bromford Road bridge in Dudley, West Midlands. The 24 bridge strikes caused a total of 72 hours of rail passenger delays.

Network Rail has worked with industry bodies for a number of years to lead a Bridge Strike Prevention Group. The group ensures companies and their employers by providing knowledge and tools for avoiding striking bridges.

“We’ve done a lot of work with partners across the industry in recent years to tackle bridge strikes, and whilst it’s encouraging to see our work is paying off with numbers now on the decline, there’s a lot more to be done to cut the unnecessary delays, costs and safety risks they pose,” stated Sir Peter Hendy CBE, chair of Network Rail, “Throughout this period, reminders to ‘Wise Up, Size Up’ will feature on petrol pumps at motorway service stations across Britain along with posters, reminding drivers to check their routes before setting off.”

Last month, Richard Turfitt, senior traffic commissioner, issued a letter to all goods vehicles and Public Service Vehicle ( PSV) operator licence holders with a warning that regulatory actions for losing operator licences could be a possibility.

The letter also stated several control measures for operators to follow. They should assess the risks and encourage routes to be planned in advance. Also, proper training for transport managers should be provided, planners are to assess risks and drivers are to be provided with adequate information of the vehicles they are driving.

Information should be provided for anyone planning or altering a route for operators to ensure drivers to have access to height conversion charts. Sites should have height measurement gauges, and each vehicle and trailer in the fleet an established running height on its technical record. The running heights should be available to anyone planning a route, including unexpected encounters or unmapped obstructions.