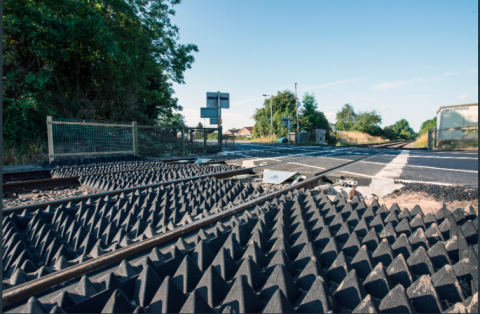 Anti-trespassing mats at level crossings in Toronto to reduce incidents

In an effort to reduce incidents at level crossings, Canadian transportation agency Metrolinx is exploring ways to separate people from speeding trains. The installation of specialized rubber panels with pointy protrusions at high risk locations will make it much more difficult to get to the tracks.

In 2019 Metrolinx started with a pilot program where rubber anti-trespassing mats (ATPs) were placed at select level crossings across the GO rail network in Toronto, Canada. Since then, the scope of the programme has been broadened and more train crossings in Ontario, where Metrolinx operates, will be provided with the ATPs.

The mats are placed in sections where pedestrians regularly try to wrongly dash across rail lines. It isn’t impossible to cross the panels, but the hard and uneven surface of the rubber panels makes it a lot harder for pedestrians to do so. Metrolinx calls it ‘nearly impossible’ to walk over the mats, and says it makes people think twice before they trespass into the rail corridors.

Every year accidents occur because people walk too close to the tracks, sometimes with deadly result. In 2019 there were at least 15 fatalities on Metrolinx owned tracks involving GO trains. With the anti-trespassing mats Metrolinx hopes to reduce these tragic accidents.

“With safety being at the very heart of our operations at Metrolinx, we decided to build on the success of the pilot program,” said Elisabeth Santo, Right-of-Way Officer at Metrolinx.

By implementing the ATPs the overall goal is to minimize delays, increase the safety for the public and to have an overall better handle on the securement of Metrolinx’s owned corridors. The panels are distributed from the UK and have been implemented there since 2004. ATPs are also used in other countries, among which are Norway, the Netherlands and Belgium.

“We are aiming to complete the installations along these three corridors by the end of this year,” continued Santo. “The future goal is to apply this same technology wherever possible across the rest of our system.”