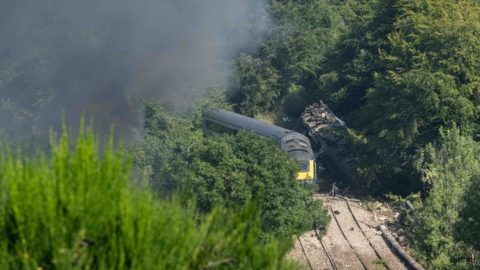 Fatal crash in Scotland: what went wrong at Stonehaven derailment

A serious derailment in the North East of Scotland has claimed the lives of three people, injured many more, and left the community in the nearby fishing community of Stonehaven in shock. The main line down the East Coast of Scotland is blocked by a wrecked passenger train with power cars and carriages strewn across the tracks and countryside. Investigators have already begun the painstaking process of finding out what caused Britain’s first fatal rail crash in over a decade.

The comfortably appointed surroundings of one of ScotRail’s flagship Inter7City trains were a welcome respite for passengers boarding the 0638 departure from Aberdeen to Glasgow on Tuesday 11 August. Conversation on board was undoubtedly turning to that most British of topics: the weather.

As with the rest of the UK, Scotland had already been battered by a huge storm system. The night before, the skies over Aberdeen had been alive with thunder and lightning, surpassing even the most spectacular aurora of the Granite City’s famous Northern Lights. The torrential rain was still falling as the refurbished diesel High Speed Train set out on the 150 miles (240 kilometres) to Glasgow in Scotland’s Central Belt.

Progress was not as planned. Beyond the air-conditioned interior, the hilly countryside was still awash with storm rains and flooding. Pulling away from the first stop at Stonehaven, normally fifteen minutes after leaving Aberdeen, the weather forced a halt. The deluge over Scotland had caused multiple problems, and a landslip affecting the line ahead forced a lengthy stop.

Around three hours later, tragedy struck. Reports suggest that after a long delay, the intention was to reverse, switch tracks, and advance on the unaffected track. However, it appears a second landslip occurred, possibly very shortly before the train traversed the line. The result was a catastrophic derailment of the entire train – both power cars and all four coaches.

Aerial pictures from the scene show a distressing scene of the entire train derailed. One coach has rolled down a steep embankment, and another appears to be piled on top of a third coach. The entire set and the permanent way are both extensively damaged.

Praise has come for the emergency services, who attended promptly in very challenging circumstances. Four emergency workers themselves were injured in a road vehicle accident on a country lane. However, the real tragedy is the loss of life in the train itself. The driver, named as Brett McCullough, and the train conductor Donald Dinnie, died along with a passenger. Six passengers have been hospitalised with what have been described as serious injuries.

Rail Accident Investigation Branch (RAIB) is on the scene, and speculation as to the exact cause of the fatal accident is being discouraged. However, the matter is the lead story in all the Scottish media. Some sources are saying that warnings about the potential problems in the area have recently been given to Network Rail, the infrastructure agency which works in alliance with the government in Scotland and the train operator. Network Rail carried out improvements in the area just over a year ago.

Alex Hynes, the managing director of ScotRail, the operator of the derailed train, issued a statement shortly after the alarm was raised. He said it was a devastating day for everyone involved. “Earlier this morning, the 06.38 ScotRail Aberdeen to Glasgow Queen Street service derailed near Stonehaven”, he said. “It is with great sadness that the British Transport Police (BTP) has confirmed three fatalities, including the ScotRail driver, and multiple other injuries. Our thoughts are with those who have been affected and we will do all we can to support them, particularly the families who have lost loved ones.

Text continues below the video

“We are continuing to work closely and quickly with the emergency services at the site. Scotland’s Railway is working with the Rail Accident Investigation Branch (RAIB) as they consider the cause of the incident. An incident care team has been established and an information telephone number has been set up. Anyone concerned can call ScotRail on the following dedicated number for information – 0333 2122528. We will continue to keep you updated on the situation.”

Operationally, the main line down the East Coast of Scotland is now blocked, meaning northbound services are unable to reach Stonehaven and Aberdeen. Passenger diversions would appear impractical, but freight could conceivably make a long detour via Inverness and Perth, adding about 250 miles (400 kilometres) to journeys. However, the network in Scotland has suffered other weather-related damage, including flooding at Perth and around ten other locations.

Although over forty years old, the iconic HST is part of a fleet that has been retired from 125mph (200 kph) express services between London and the West of England. An extensive rebuild has seen the trains redeployed on domestic services in Scotland, connecting the ‘seven cities’ and offering more capacity and better passenger accommodation. With lower running speeds on their new duties, the units are expected to have a profitable life for years to come.